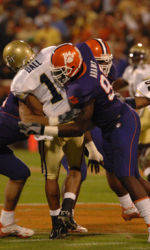 Roslyn, PA – The Maxwell Football Club announced the 2006 semifinalists for the Bednarik Award and George Munger Award on Wednesday. Clemson senior defensive end Gaines Adams was one of 16 players on the list for the Bednarik, given to the nation’s top defensive player. Tommy Bowden was named one of the semifinalists for the Munger Award, presented to the College Coach of the Year.

Adams, also a semifinalist for the Lombardi Award and Ted Hendricks Award, leads the Atlantic Coast Conference with 8.5 sacks and ranks eighth nationally in that category. He is third in school history with 24 career sacks. He set a Clemson record with a sack in six straight games after recording one in a 31-7 win over #13 Georgia Tech last Saturday.

The announcement of the winner of the Bednarik Award will be made during the Home Depot College Football Awards Show that will be broadcast on ESPN on December 7, 2006. Three finalists for the award will be in attendance. The Maxwell Football Club will announce the winner of the 18th George Munger Award via a press release in December.

Also this week, Rob Spence was named the National Coordinator of the Week by Rivals.com after his offense compiled 321 rushing yards against what was one of the nation’s top 10 defenses against the run in Georgia Tech. The same site named Tiger rookie C.J. Spiller the National Freshman of the Week. The Lake Butler, FL native totaled 116 yards rushing and scored on a pair of 50-yard plays. Clemson is the first team in the 2006 season to sweep the awards for a week.

Clemson is 7-1 on the season and ranked as high as #10 by the Associated Press.