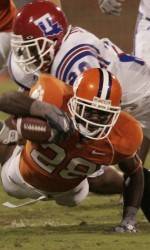 Adams and Spiller Earn ACC Player of the Week Honors

Gaines Adams and CJ Spiller were both named Players of the Week by the Atlantic Coast Conference on Monday after helping the Tigers to a 27-17 win over the Demon Deacons on Saturday. Adams’ eight tackles, two sacks, two forced fumbles and one 66-yard fumble return for a touchdown earned him Defensive Lineman of the Week honors. Spiller was named the conference’s Rookie of the Week after rushing for 104 yards on nine attempts and scoring the go-ahead touchdown on a 72-yard run in the fourth quarter.

Complete Release from the ACC:

NC State quarterback Daniel Evans had his second outstanding game in as many starts this season, completing 13 of 22 passes for 190 yards, three touchdowns and no interceptions in the Wolfpack’s 24-20 come-from-behind victory over 17th-ranked Florida State last Thursday night. The Raleigh, N.C., product threw a touchdown pass in each of the game’s final three periods and improved to 2-0 as a starter, with both victories coming over ranked opponents. Evans’ father, Johnny, earned ACC Offensive Back of the Week honors twice while playing at NC State, Oct. 18, 1975 and Oct. 1, 1977.

Miami tight end Greg Olsen caught a game-high eight passes for 95 yards in Saturday’s 27-7 win over visiting North Carolina. The Wayne, N.J., junior came into the game with only 10 catches through the first four games. In addition to tying his career-best for catches in a single game, Olsen has now caught two or more passes in 15 of his last 17 games.

In earning the award for the second time this season Clemson defensive lineman Gaines Adams had perhaps his top game as a Clemson player in Saturday’s 27-17 win over previously unbeaten Wake Forest. The Greenwood, S.C., senior had eight tackles, including three tackles for loss, two of which were quarterback sacks against the Deacons. In addition, Adams forced two fumbles, recovering one that he returned 66 yards for a touchdown triggering a Tiger rally from a 17-3 fourth-quarter deficit.

Georgia Tech outside linebacker KaMichael Hall turned in another strong effort for the Yellow Jacket defense to help the 18th-ranked Yellow Jackets to a 27-23 ACC victory over Maryland. The Houston, Texas senior made the key defensive play in the game with his fourth quarter fumble recovery at the Maryland 17-yard line setting up Tech’s go-ahead touchdown two plays later. Hall had a game-high 11 tackles, with one sacks and 1.5 tackles for loss against the Terps. Over the last two games in wins over Virginia Tech and Maryland, Hall has combined for 22 tackles, three sacks, 3.5 TFL, one forced fumble, one fumble recovery and two pass breakups.

Wake Forest punter/placekicker Sam Swank had an outstanding game in Saturday’s 27-17 loss to 15th-ranked Clemson. The Jacksonville Beach, Fla., sophomore was directly responsible for forcing the Tigers to start inside their own 20 eight times, including four times inside their own five yard line. Swank had punts downed inside the five yard line, including a one at the one, two at the two and one at the four yard line. He averaged 43.8 yards per punt, had four kickoffs, all for touchbacks and made his only field goal attempt of 22 yards.

In earning the award for the second time in three weeks, Clemson’s C.J. Spiller gained 104 yards rushing on just nine attempts and scored what proved to be the winning touchdown on a 72-yard run in the Tigers’ 27-17 victory over Wake Forest Saturday. Spiller’s 72-yard scoring jaunt came with 7:22 left and gave the Tigers a 24-17 lead. The run was the longest by a Clemson running back in 13 years and the longest touchdown run by a Clemson player since 2002. Spiller averaged 11.6 yards per attempt in recording his second consecutive 100-yard rushing game.