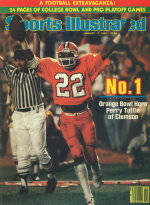 It’s Perry Tuttle’s Muhammad Ali-over-Liston moment…his Beatles-strolling-across-Abbey-Road image. And 30 years after it graced the cover of Sports Illustrated in recognition of Clemson’s national championship, Tuttle’s teammates can’t seem to stop teasing him about it.

“Jeff Davis swears I’m the only guy who can make a living off one catch,” Clemson’s 2011 ACC Legend said recently.

That’s a bit of an exaggeration, of course. It would also be unfair to suggest Tuttle has crassly capitalized on a collective effort for massive personal gain. If anything, the former wide receiver has spent his pro career and his nominal retirement years using the moment to advocate for a variety of pursuits from fatherhood to constructive dialogue on race relations to the values of his alma mater and its conference.

Read the complete article on theACC.com.