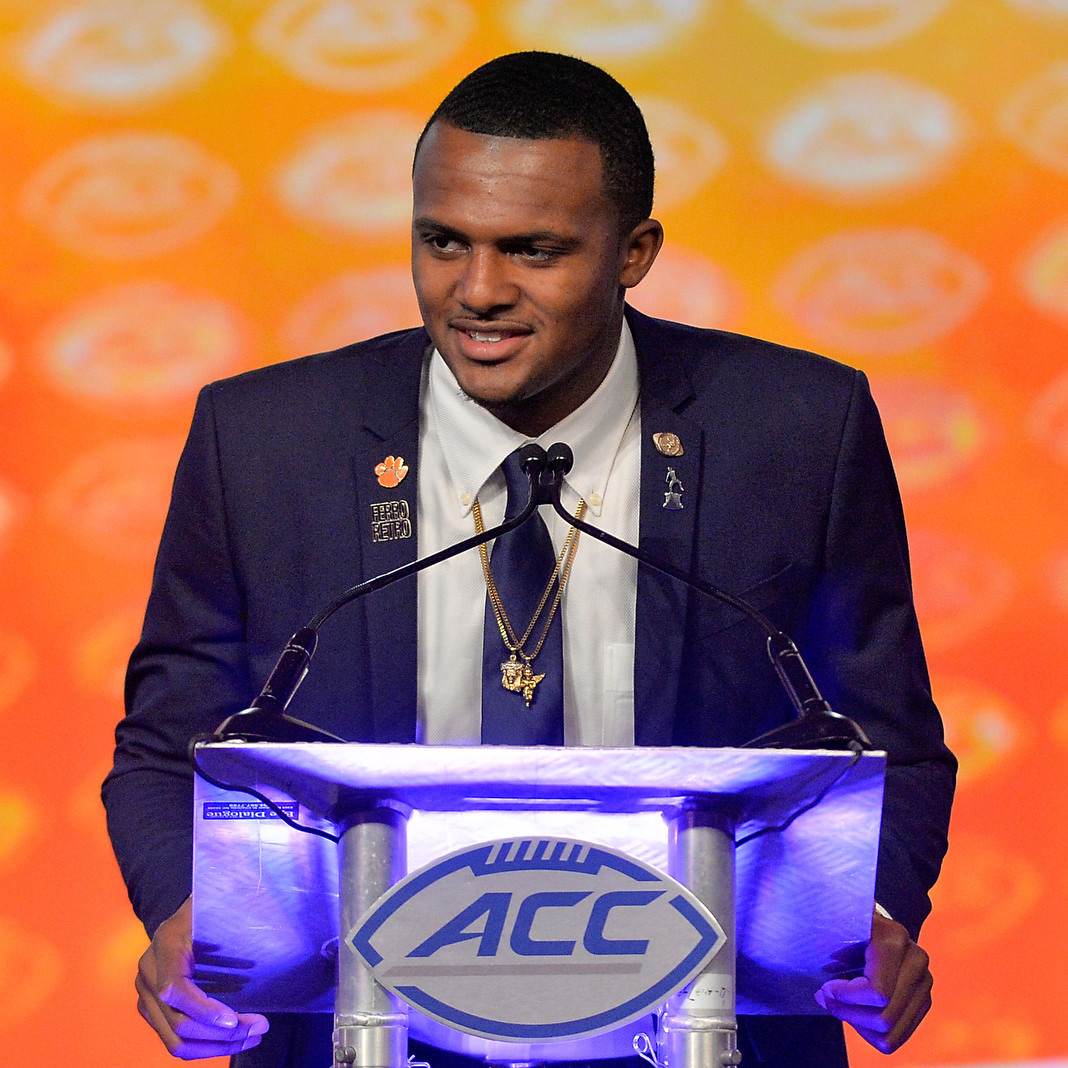 One of the league’s annual events, the ACC Football Kickoff was held Thursday and Friday at the Westin in downtown Charlotte, N.C. For the first time, the ACC split up the two divisions, focusing on Coastal teams Thursday and Atlantic Division teams on Friday. Each team sent its head coach and two players. Clemson’s representatives for the 2016 event were coach Dabo Swinney, along with quarterback Deshaun Watson and linebacker Ben Boulware.

Follow along with our live blog throughout the day as we offer news, notes and nuggets concerning everything related to Tiger football!

8:45 a.m. – The Atlantic Division coaches and players have gathered in the hotel, and will soon be going over instructions on the day’s activities. Our slate begins at 9 with a string of radio interviews, some live and some taped. Coach Swinney will begin promptly off the top of the broadcast with William Qualkinbush and Kelly Gramlich on WCCP’s “Out of Bounds” at that time, followed by both players. Check out the archived interviews below!

9:25 a.m. – Swinney breezed through interviews with Qualk & Kelly, and then with Clemson grad Mark Packer and his Sirius XM show. He then found his way to Kevin McCrarey of the South Carolina Radio Network. On the taped broadcast, Swinney said his group had a “humble focus to them” this offseason.

More Swinney on KMac’s show: “The spotlight isn’t new to us anymore. We’ve been favored in 90-plus percent of our games the last five years and won a ton of them. We get everyone’s best shot each week. The biggest thing for us be who we are. Prepare and play with a passion and love for what we’re doing. Treat every game as if it’s the National Championship. It doesn’t matter who you play or what time you play. We embrace where we are as a program, because we expect to represent excellence year in and year out.”

10:15 a.m. – The ESPN College GameDay room was entertaining, with some off-the-wall questions about anything and everything.

Some of the highlights included:

If you could create an emoji what would it be?

Who’s your favorite teammate to follow on social media?

Who do people say you look like the most?

Swinney: “When guys are nonchalant or not dialed in with the intensity we need at the moment.”

Most memorable Gatorade bath ever?

Swinney: “I turned 40 and we beat Virginia to clinch the Atlantic Division in ’09, my first season as head coach. The other was beating South Carolina as interim coach in ’08. The taste of that Gatorade meant I was probably going to get the job.”

10:45 a.m. – The ACC Network room provided a comedic moment. Boulware arrived in style Friday, wearing a flowery shirt, pink tie and capri pants. It led to a number of media folks snapping photos and posting them to their Twitter accounts. Well, former Clemson coach turned broadcaster Tommy Bowden was hanging out in the ACCN room. Upon Boulware’s entry into the room, Coach rolled his pants up to match Ben. It got a great laugh.

Boulware then was asked to go into the outfit choice. He said the cream blazer was purchased at M.H. Frank in Clemson, his shirt was found in a shop in Savannah, Ga., his “fake capris” he found in Charleston, and his shoes came from Easley. “A lot of variety in there,” he said.

11:30 a.m. – Swinney, Boulware and Watson took the stage in the grand ballroom for the press conference portion of the event. Following a brief Q&A session, the three will then break out into follow-up rooms with print and electronic media.

Below are some highlights from the session.

Watson on his relationship with Cam Newton:“We became close friends and communicate all the time. I met him at a camp when I was 17. He teaches me all the time – listen to the coaching staff, don’t get distracted by the outside noise. He probably won’t be pulling for us against Auburn, but he will for every other game.”

Watson on wide receiver corps:“We have a great group, with a lot of talent coming back and a lot of potential. They let me know how to throw the ball versus certain coverages. We communicate well. We have a lot of depth, with young guys that can compete in camp for positions. We’re not going to be given 40 points every Saturday because of the talent we have, so it comes down to us executing and grinding at a high level.”

Boulware on balancing football and academics:“Just be mature enough to know your role. Coach preaches to us every day of instilling the values in us, being a good citizen on and off the field. My education will carry me for the rest of my life, but football will only last so long. He’s recruited great men in his program, and he knows we’re going to take care of business.”

Boulware on surprise player defensively:“It won’t be a surprise, but Dexter Lawrence is going to have a great career at Clemson. He’s mammoth at 340 pounds or whatever. He’s a freak athlete for his size. He’s a little quiet, but that’s not too different for a freshman. I really look forward to seeing what he will do over his career.”

Swinney on staff continuity:“You surround yourself with great coaches. To be good at anything, you have to be around good people. It’s a people business. Coach Saban at Alabama, and Coach Meyer at Ohio State, have always had great staffs. I’ve been fortunate to have a great staff really from the start. I’ve had great men I’ve worked with from day one that do an incredible job helping us build a program. The credit goes to the players. You can have good coaches, but if the players don’t buy in, it won’t work. I’m very thankful for the young men have played for me. Guys that stayed the course and didn’t grow weary mean so much to me. I’m appreciative of all the people that have helped build our Clemson brand. It’s a total group effort by a lot of people.”

2 p.m. – Swinney and Watson have made their way onto the set with ESPNU’s Anish Shroff and Tom Luginbill. The players and coaches broke for lunch following a long session with the print media, providing a much-needed rest after several hours of interviews in the morning. The broadcast featuring Swinney and Watson will also be replayed by ESPNU, according to personnel on site.4 p.m. – DONE! All three did a great job representing Clemson Athletics, and wrapped up in time to catch a charter flight back to Tigertown. Swinney won’t get much rest, as he heads up to Bristol, Conn., on Sunday for an all-day affair at ESPN’s headquarters as part of the “car wash” on Monday, July 25.