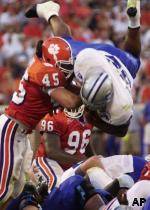 John Leake has been selected as the ACC Defensive Player of the Week following his 14-tackle performance against Georgia Tech. He and the Tigers will next play at Maryland on October 4, which will kickoff at 3:30 PM and it will be televised by ABC.

NC State’s Sean Locklear (Lumberton, N.C.) helped pave the way for 474 yards of total offense and five offensive touchdowns in the Wolfpack’s 49-21 victory over Texas Tech. The 6-5, 296-pound outside guard cleared a path for tailback T.A. McLendon to gain 124 yards rushing and provided space for QB Philip Rivers to complete 18 of 22 passes for 257 yards. The senior saw action in 64 plays and received the highest grade on the line.

Clemson linebacker John Leake (Plano, Texas) had a team-best 14 tackles to lead the Tigers to a 39-3 win over Georgia Tech. The 6-1, 225-pounder recorded three tackles for loss in the first ten minutes of the game, setting a career-high for that category during the game. Leake tallied eight first hits and six assists in his 57 snaps. The senior also had his first career interception, one that set up a touchdown for Clemson in the second period. Leake helped Clemson hold Tech to just 45 yards rushing in 33 attempts and held the Yellow Jackets to three points for the first time in five years.

NC State CB Greg Golden (Fort Lauderdale, Fla.) had a 71-yard interception return for a touchdown in the Pack’s 49-21 victory over Texas Tech. The 5-11, 185-pound junior also recorded two solo tackles in 61 snaps and played a key role in the Wolfpack’s defense that kept Texas Tech from converting 10-of-15 third down conversions and 5-of-7 fourth down conversions. Golden was also a part of the defensive effort that snuffed the Red Raiders on three-of-four red zone opportunities.

North Carolina’s Michael Waddell (Ellerbe, N.C.) had four punt returns for 176 yards, including a 97-yard touchdown in North Carolina’s 27-38 loss to Wisconsin. The 5-11, 183-pound senior’s kickoff return for a touchdown was the Tar Heels’ first since Kory Bailey’s score against Georgia Tech in 1998. The 97-yard return equaled the third-longest kickoff return in school history. Waddell also added kickoff returns of 18, 35 and 26 yards. His 176 yards on kickoffs was just eight yards shy of the school record.