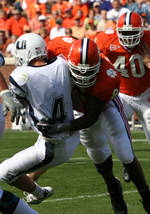 GREENSBORO, N.C. – – The Atlantic Coast Conference announced today that six Clemson football players have been suspended, and four others reprimanded, as a result of the fighting incident that occurred at the South Carolina-Clemson football game on November 20.

Following a thorough review of available video footage, the ACC has issued one-game suspensions to Nathan Bennett, Brandon Cannon, Duane Coleman, Roman Fry, Maurice Nelson and Anthony Waters. Each player’s one-game suspension must be served during the 2005 regular season with each player’s game to be determined by Clemson University. In addition, senior Yusef Kelly would have received a one-game suspension if he had any eligibility remaining.

In addition, Cory Groover, Tommy Sharpe, Nick Watkins and Bobby Williamson will receive letters of reprimand for their involvement in the incident.

“I commend Clemson University for the way they immediately and decisively addressed the situation,” said Swofford. “They made a loud and clear statement for college football by foregoing a bowl invitation. Clemson’s strong action mitigated additional consideration of sanctions involving other student-athletes as well as individual multiple game suspensions.

“What took place in the South Carolina-Clemson game has no place in college football or any other sporting event. The ACC is compelled to take this action because of the nature and seriousness of the situation and to further provide a clear and definitive message that the Conference will make every effort to exemplify the very best qualities of sportsmanship and that the actions that took place are not acceptable at the institutional or conference level.”

Coach Tommy Bowden Statement: “There is no justification for the altercations that took place at the end of the Clemson vs. South Carolina game, and I am disappointed in the actions of some of our players. But, 90 percent of them either stayed out of it or tried to break it up.

“I hurt for our players and coaches because I know how hard they worked this season. At the same time, I understand the mission of the university, the importance of integrity, and thus accept the decisions made by our administration and the Atlantic Coast Conference.

“I am disappointed that we are not going to a bowl game. I feel for the players and our assistant coaches.

“I am especially disappointed for the seniors, who won’t have another opportunity to play for Clemson. These seniors contributed significantly to our three top 10 wins within the last 15 games. Their leadership was the biggest reason we were able to overcame a 1-4 start to become bowl eligible, something that had not been accomplished previously in ACC history.

Statement from Clemson players who were suspended for one game in 2005 or reprimanded by the Atlantic Coast Conference on Monday: “We realize there is no place for fighting in college athletics and we accept the suspensions imposed by the Atlantic Coast Conference today. We apologize to any Clemson alumnus or college football fan who was embarrassed by what happened.