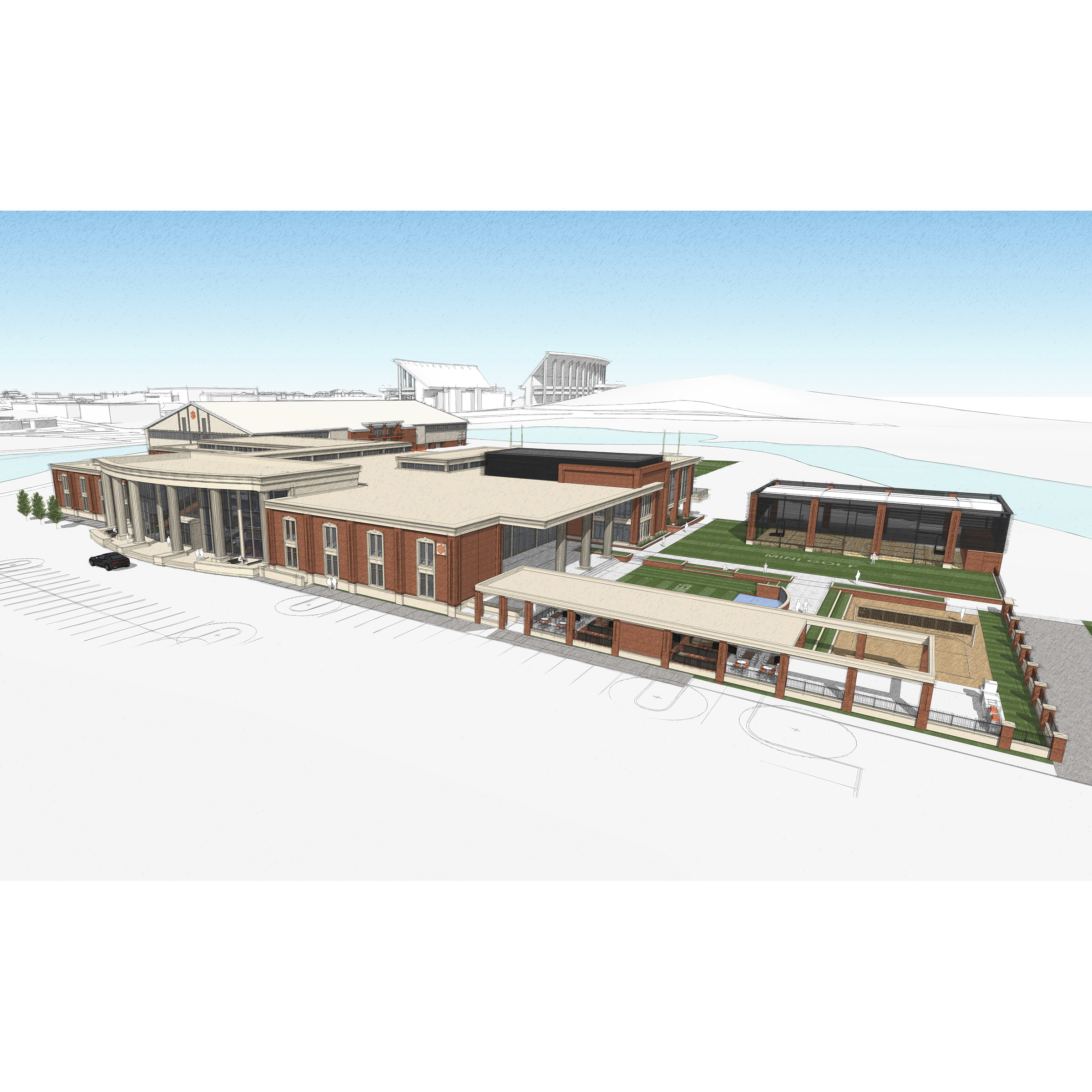 A new era of Clemson football is officially underway. On Friday afternoon, Clemson athletics held a ceremonial groundbreaking for the new football operations complex adjacent to the indoor practice facility.

In the upcoming months, the 140,000 square-foot facility will take root on the west side of the indoor practice area, springing to life one of the nation’s premier complexes for football operations.

“We hope it will be the home of Clemson football for the next 50 years,” said Graham Neff, associate athletic director for finances and facilities.

Clemson athletics received final approval for the project in late October and will begin construction on the new facility after the completion of the men’s and women’s soccer seasons.

The targeted completion date for the $55 million project is the winter of 2017. The complex will include all of the elements needed to run the day-to-day operation of the football program – locker room, training room, equipment room, weight room, meeting rooms, dining hall, recruiting center and coaches offices.

“From a programmatic standpoint, it includes everything that’s in the WestZone currently, but so much more,” stated Neff.

“Football is looking to package the focus on life skills and career services better from a branding and resource standpoint,” said Neff. “So it will have some unique elements as well.”

The uniqueness of the facility does not end there. Inside, the main lobby of the operations complex will house a replica of the Hill, complete with the Rock at the top, that will provide a significant boost in terms of recruiting visits.

The complex will also use plenty of outdoor space by incorporating the geography from the Seneca River and the surrounding area.

One of the biggest advantages the new facility offers is the chance to bring all of the program facets together in close proximity. The everyday practice for the players on the team is somewhat of a process. Following position-specific meetings, players board a pair of trams and are transported from Centennial Boulevard to Avenue of Champions, and ultimately dropped off at the circle in front of the indoor facility.

The process then repeats itself after practice. Head coach Dabo Swinney believes the program stands to benefit tremendously by cutting out that portion of the process.

“We ‘tram’ our guys year-round across the street, and there’s always some disconnect when they’re over there and we’re over here in the summer time,” said Swinney.

“I think it would be a great thing for us because we won’t have to be displaced while it’s being built. We can continue to have a great facility to recruit to, and it would allow us to have a football operations center where it all happens…the practice, the indoor facility, everything…you name it. It’s total operations, right there, so you’re with them and interacting with them all the time.

“Then on gameday, when you walk in that locker room, it’s special…seven days a year.”

The WestZone’s future has yet to be determined, but the locker room, equipment room and sports medicine areas will remain for use on gamedays.

One or several aspects of Clemson’s athletic programs will stand to benefit from the additional space provided by football’s departure to a new state-of-the-art complex.

Neff also pointed out that as the program has grown, the need to better serve its needs has also become a necessity.

“More than anything, the operations facility will be better equipped to handle the growth of the program,” he said. “Not only staff and student-athletes, but it means recruiting and career services areas as well as additional workspace. There’s no secret the staff has grown.”

Finally, improving the staff’s efficiency is another end result of the new operations complex. Much of the project’s budget will be devoted to soft costs for technology. Coaches currently utilize a number of different software programs, from ARMS to Blue Chip to XOS Digital. Neff said the department hopes to partner with an outside group to help secure a dashboard-type software that will assist the staff with operational efficiency.

“Even though the facility is very much student-athlete centric, the layout of the building will be very efficient for the coaches,” added Neff. “And that’s another one of those unique elements.”

It is an all-around unique facility for one of the nation’s unique programs.