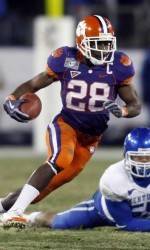 #28 To Be Retired at Maryland Game

CLEMSON, SC – Clemson will retire number-28 from its football roster in honor of C.J. Spiller during halftime ceremonies of the Clemson vs. Maryland game at Memorial Stadium on October 16. The game will kickoff at 12:10 PM and will be televised by the Raycom Sports Network.

Spiller is now a member of the Buffalo Bills of the NFL after that franchise made him a first round draft choice last April. The Bills do not play this coming weekend, so Spiller will be able to attend the ceremonies.

Spiller established 33 records during his Clemson career (2006-09). As a senior last season he became the ACC’s career record holder in all-purpose yards with 7588, the second highest total in NCAA history. In 2009 he returned four kickoffs for touchdowns and his seven kickoff returns for touchdown in his career established an NCAA record.

In leading Clemson to the Atlantic Division title and top 25 final ranking in the AP poll, Spiller was named the Player of the Year in the Atlantic Coast Conference and was a unanimous first team All-American as an All-Purpose player. He became just the third unanimous All-American in school history. He was sixth in the voting for the Heisman Trophy, tied for the highest finish in that balloting with former Clemson All-American Steve Fuller.

Spiller will lead the Clemson team through “Tiger Walk” on Saturday. That will take place at approximately 10:00 AM in the lot 5 parking lot outside the West Endzone of the Stadium. The actually number retirement ceremony will take place at the beginning of halftime.