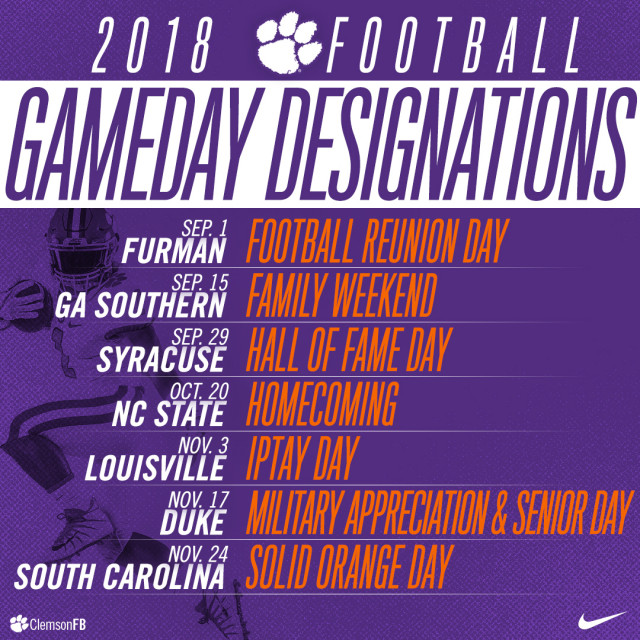 The Clemson Athletic Department, in conjunction with the alumni association, student affairs, IPTAY and other campus groups, released special game day designations for the 2018 football season on Monday. The Tigers will play seven home games in 2018, the 13th consecutive year Clemson will play seven in Memorial Stadium.

Clemson begins its home schedule on September 1 against its oldest rival, Furman. The two teams first met on Oct. 31, 1896 in Greenville in the first game in Clemson history. Fittingly, this year’s game will be Football Reunion Day as team members from anniversary teams will be celebrated.

Two weeks later Clemson will play host to Georgia Southern for the first time and that game will be designated as Family Day. The last Saturday of September, Syracuse comes to town for Hall of Fame Day, as the new class will be inducted on this day.

NC State comes to town on October 20 and that will be Clemson’s Homecoming. A tradition that dates to 1922, it is a weekend celebration that features floats on Bowman Field and Tigerama the evening before the game. Clemson is 71-20-3 in games played on its previous 94 homecomings, including 41-4-2 since 1971.

The athletic department also announced on Monday that the annual spring football game will be held on April 14. The exact time will be announced soon.  Fan Appreciation Day will be Sunday, August 12 at Memorial Stadium.