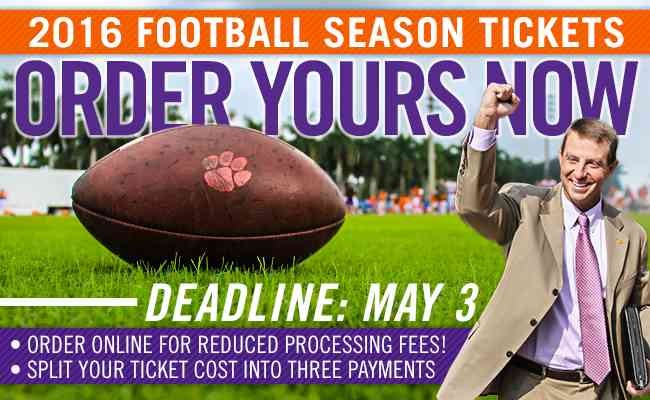 Clemson, S.C. – Coming off an historic season featuring 14 wins, an ACC Championship, a win in the College Football Playoff National Semifinal at the Orange Bowl and a berth in the CFP National Championship, excitement for Clemson Football is at all-time levels. Each of Clemson’s seven home football games were sold out in 2015 and the Tigers have won a school-record 16 straight home contests.

Beginning today, IPTAY members can begin renewing their season tickets for the 2016 campaign through ClemsonTigers.com. The Tigers again have a seven-game slate beginning with a pair of non-conference tilts in September, two ACC games in each October and November and the regular-season finale against South Carolina.

IPTAY members can purchase tickets at a reduced rate of $365, a total of $50 (12%) off the full face value of season tickets and the price available to the general public. Individual game prices include the two September games at $40 each, with each ticket purchaser receiving $2 off the purchase of bottled water, the four conference games set at $60 and the season-ending game against South Carolina is $95.

“Our fans’ support of IPTAY and their passion for Clemson Football is on full display every fall Saturday in Memorial Stadium, and it’s important for us to show our appreciation by offering a discount off the face value of season tickets,” Director of Athletics Dan Radakovich said.

IPTAY members have a priority deadline of May 3 to order season tickets at the discounted rate and have an opportunity to pay over three installments. Any remaining season tickets will be made available to the general public on June 8 at the full cost of $415. Based on availability, single game home and away tickets will go on sale to IPTAY donors in mid-July.

Fans are encouraged to purchase through the online ticketing system at ClemsonTigers.com, where they will receive a discounted processing fee compared to paper and in-person orders. Paper applications will still be mailed and should be received by late March.

For more information, please visit ClemsonTigers.com or call the ticket office at 1-800-CLEMSON.