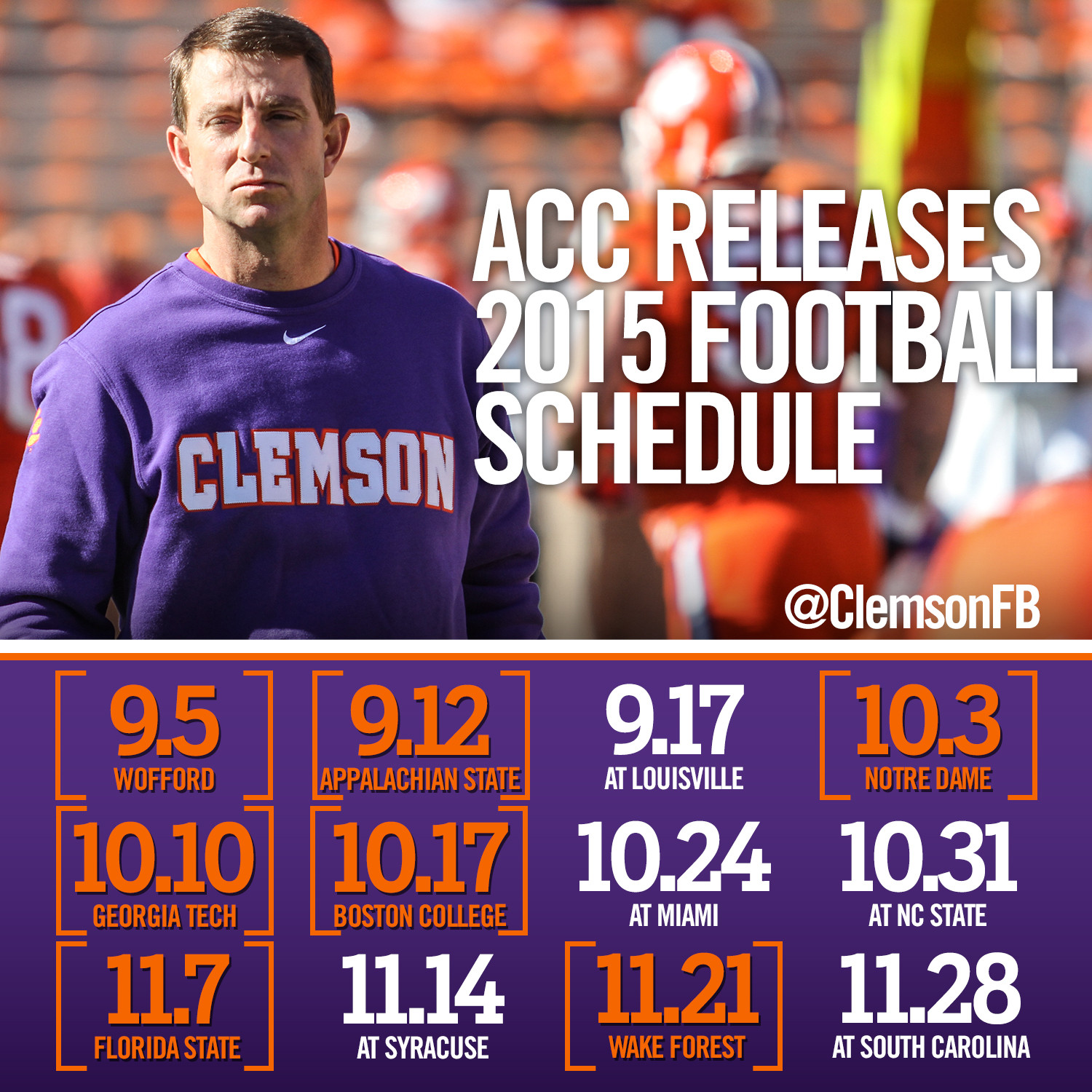 The Tigers’ schedule features seven home games and five on the road for the 10th consecutive regular season. Five of Clemson’s first six games are at home for just the fifth time in history, just the second time in the last 23 years.

“I am always excited to see the schedule for the upcoming season because it allows us to plan our journey for the next season,” said Head Coach Dabo Swinney.  “There is no doubt this will as challenging a schedule as we have ever had with some great home games and tough games in road venues.  We are already preparing for the challenge and can’t wait to get started with spring practice (March 2).”

Clemson opens the 2015 season on the same date and against the same opponent the Tigers faced in opening the National Championship season of 1981, a September 5 contest with Wofford.  Week two will see the Tigers face Appalachian State in the first  meeting between the two schools as FBS members, and the first time Appalachian State has come to Clemson since the two teams met in the season opener of 1997.

Clemson will have a quick turnaround for its third game, when the Tigers open ACC play at Atlantic Division rival Louisville on Thursday night, September 17. It will be the first of seven straight games against 2014 bowl teams. Clemson has won four straight Thursday night regular season games dating to the 2009 season. It will be the first time Clemson has had just five days to prepare for a game since 2012 when the Tigers won at Wake Forest.

Notre Dame comes to Clemson for the first time since 1977 when the two schools faced in a meeting of top 15 teams. Notre Dame won that game, 21-17, and went on to win the National Championship.  Clemson won the rematch two years later in South Bend, 16-10. The two schools have not met since. Clemson will have 16 days to prepare for Notre Dame, the most preparation for a game in the middle of a season since 1918.  Notre Dame has a .732 winning percentage in its history, best among all FBS schools.  Over the last four years Clemson has defeated seven of the top 25 schools on that list (Ohio State, Oklahoma, Florida State, LSU, Georgia, Auburn and Virginia Tech).

Clemson plays its first Saturday road game of the year at Miami on Oct. 24. It will be the first meeting between the two schools since 2010 when Miami won at Clemson. Clemson won its last trip to face Miami in 2009 by a 40-37 score in overtime. The road team has won all four meetings since Miami joined the ACC in 2004.

Clemson will play back-to-back road games when the Tigers travel to Raleigh to face N.C. State. Clemson defeated a Wolfpack team that won eight games last year by a 41-0 score, the second largest margin of victory for the Tigers over a league team that would win at least eight games in Clemson’s 62 years in the ACC.

On Nov. 7, Clemson hosts Florida State in a battle of two of the four teams nationally that have ranked in the top 25 of the final AP and USA Today polls each of the last four years. The winner of the Clemson vs. Florida State game has gone on to win the Atlantic Division of the ACC each of the last six years.

The Tigers play their fourth and final ACC road game on Nov. 14, traveling to Syracuse for just the second time. The Tigers defeated the Orange 49-14 the last time they played at Syracuse, and won the contest at home last year 16-6.

The Tigers conclude their ACC schedule Nov. 21 at home against Wake Forest, marking the second time Wake Forest has been Clemson’s opponent on “Senior Day” at Memorial Stadium since 1989.

Clemson concludes the regular season at South Carolina on Nov. 28. The Tigers won the rivalry game last year by a 35-17 score at Memorial Stadium.