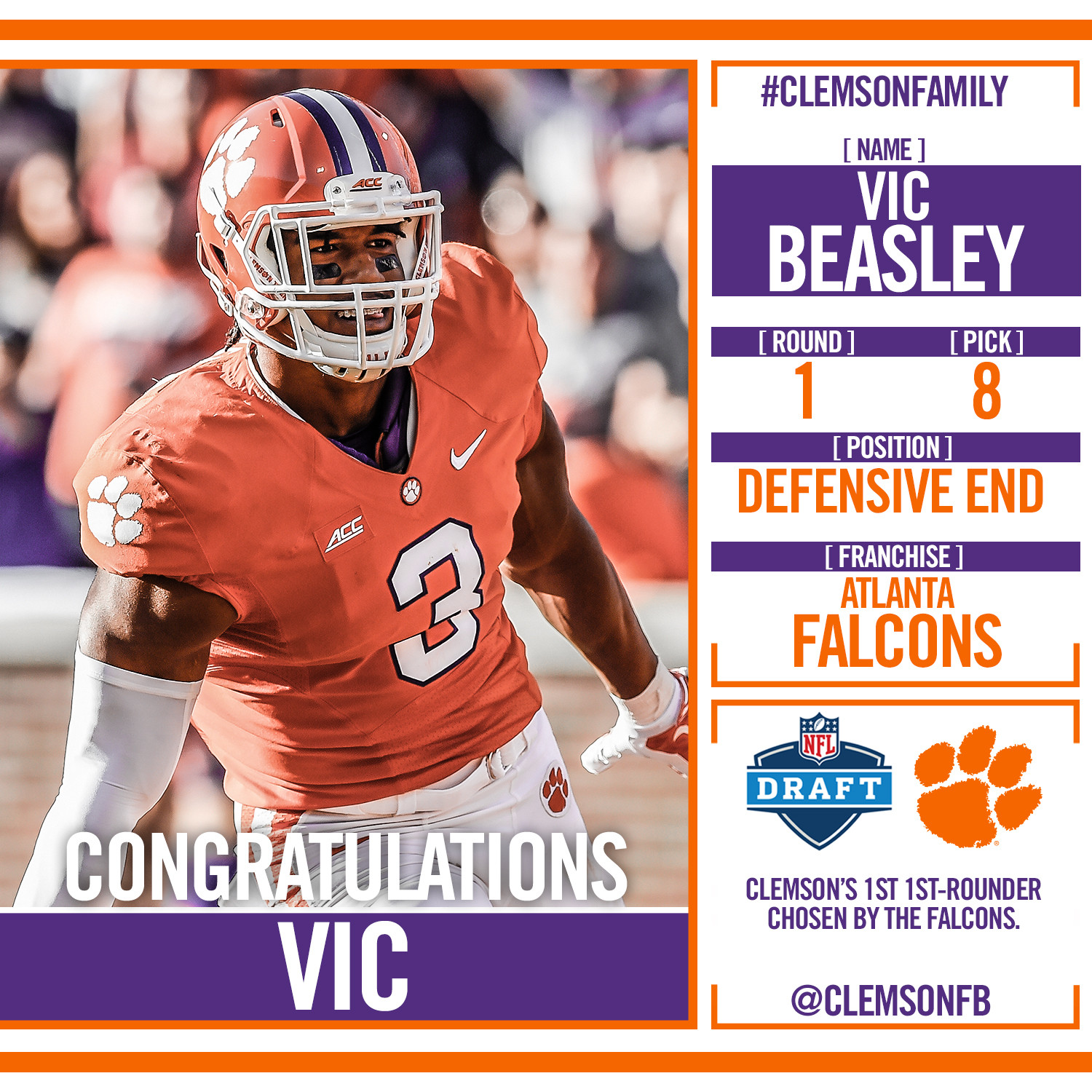 We’ll have live coverage wire-to-wire of the 2015 #NFLDraft, held Thursday through Saturday in Chicago’s Auditorium Theatre. Vic Beasley, Clemson’s career leader in sacks, was the first Tiger off the board Thursday, going eighth overall to Atlanta. Stephone Anthony followed in the first, going No. 31 overall to another NFC South member, the New Orleans Saints. Meanwhile, a host of other Tigers — including several more from the nation’s reigning No. 1 defense — look to achieve something they’ve always dreamed of … being drafted by an NFL franchise!

CLEMSON, S.C. — Defensive end Vic Beasley was selected by the Atlanta Falcons with the eighth selection of the first round of the NFL Draft held in Chicago on Thursday night. Beasley was the ACC Defensive Player of the Year and a consensus All-American in 2014, when he helped Clemson lead the nation in total defense for just the second time in school history.

Beasley is the 25th Clemson player in history to be chosen in the first round of the NFL draft, the fourth in the last six years. He is the seventh Tiger in history to be chosen within the first eight picks of the draft. Among Clemson defensive players, only Gaines Adams (4th, 2007) and Jeff Bryant (6th, 1982) have been taken with a higher selection.

The native of Adairsville, Ga. — just 50 miles from the Falcons’ facility — is just the fifth Clemson player drafted by the Atlanta Falcons, the first in the first round. However, he is the second Clemson defensive end taken by the Falcons in the last three years. Malliciah Goodman was a fourth-round pick by the Falcons from Dabo Swinney’s program in 2013.

“When I saw him tonight, he had a red and white suit on. I asked him about wearing those colors, and he said they are the colors of the Atlanta Falcons. That is where he wanted to go, and where he thought he would go.

“I am so happy for him because he wanted to play near his family. His father was so excited he could hardly stand up to hug him.

“The Falcons came up and worked him out a long time ago, and we thought they were very interested.

“This is a great night for our program. With a top-10 selection last year on offense (Sammy Watkins) and a top 10 selection on defense this year, it shows our commitment on both sides of the ball. And we should have many more defensive players taken this weekend.

“Coach (Brent) Venables and (Marion) Hobby were both here with me at the draft, and I am so proud of the job they did in developing Vic over his career. This is a guy who came to us as a running back.”

Beasley is the first Clemson defensive player to be taken in the first round since Gaines Adams was the No. 4 selection of the entire draft in 2007. Like Beasley, Adams was a consensus All-American his senior year.

Beasley is the fourth Clemson player since Dabo Swinney became head coach in 2009 to be a first-round draft choice. He is now second in Clemson history among coaches in drafted first-round selections. Danny Ford coached seven first-rounders between 1979-89.

Beasley joins Bennie Cunningham, a tight end in 1974 and 1975, as the only Clemson players in history to be a two-time first-team All-American, a first-round draft choice and graduate from Clemson.

CLEMSON, S,C. — Stephone Anthony, the top tackler on Clemson’s top-ranked defense, was selected in the first round of the 2015 NFL Draft by the New Orleans Saints on Thursday night. Anthony was the 31st selection of the draft and gave Clemson two first-round draft choices.

This marks just the third time Clemson has had two first round selections in the same draft, the first time in 33 years. In the 1982 NFL draft, defensive tackle Jeff Bryant and wide receiver Perry Tuttle were both first-round selections.

Clemson also had two selections in the 1979 draft, as Jerry Butler was taken by the Buffalo Bills and Steve Fuller by the Kansas City Chiefs.

This is the first time Clemson has had two defensive players taken in the first round of the same draft. Many other members of Clemson’s 2014 defense are expected to be chosen on Friday and Saturday as the NFL Draft continues.

Anthony is just the fourth player from Clemson to be selected by the Saints, the first since the 1990 draft when wide receiver Gary Cooper was chosen in the 10th round. Cliff Austin was a third-round selection in 1983 and Tony Stephens was taken in the third round in 1988.

The last former Tiger to play for the Saints is Anthony Waters, a linebacker Super Bowl Championship team of the 2009 season.

Anthony will join former Clemson running back C.J. Spiller on the Saints roster in 2015. Spiller signed a free agent contract earlier this off season.

Anthony was a first-team All-ACC linebacker last fall, with 90 tackles. He also had 10.5 for loss and led the Tigers in tackles in five of the 13 games.

• It was a dream come true for Beasley, taken No. 8 overall by his hometown Atlanta Falcons (he hails from nearby Adairsville, Ga.).• The Falcons tied for 30th out of 32 NFL teams in sacks in 2014, surely a large part of the Falcons’ executives thinking. Look for Beasley to potentially transition to outside linebacker in the NFL.

Anthony Sneaks in First Round

• Versatile linebacker Stephone Anthony made it two first-rounders off the nation’s top-ranked defense to be chosen in the first round Thursday.• Anthony certainly impressed NFL Network analyst Mike Mayock, who raved about the Saints’ selection. “I think his best football is ahead of him.”

• Think Coach Swinney and his staff have made a difference in recruiting? Following Beasley and Anthony’s selections, it gave the Tigers their 30th NFL Draft selection since Swinney was hired as head coach. That trails only Florida State (31) among ACC schools during that time.• Clemson has had at least one defensive end drafted in five of the last six years: Ricky Sapp (2010), Da’Quan Bowers (2011), Andre Branch (2012), Malliciah Goodman (2013) and Beasley.