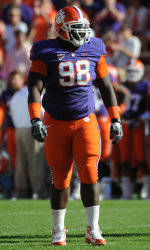 GREENSBORO, NC – Florida State and Miami led all Atlantic Coast Conference schools each with four players selected to the 2011 Preseason All-ACC Football team in voting conducted by the media at the annual ACC Football Kickoff, which was held July 24-25 at the Pinehurst Resort in Pinehurst, N.C.

In all, 15 of the 25 honorees on the team earned first or second-team All-ACC honors last fall, with nine having been selected to the All-ACC first team. Three of the selections are returning first-team 2011 All-Americas.

The Seminoles, tabbed by the media at the ACC Football Kickoff to win their first ACC Football title since 2005, had quarterback EJ Manuel (Virginia Beach, Va.) and offensive tackle Andrew Datko (Weston, Fla.) chosen on offense; defensive end Brandon Jenkins (Tallahassee, Fla.) selected on offense; and cornerback Greg Reid (Valdosta, Ga.) named as the specialist for his abilities as a punt and kickoff returner.

Boston College and Duke each had two players chosen. BC was led by preseason player of the year tailback Montel Harris (Jacksonville, Fla.) who enters the season needing 1,002 rushing yards to break the 33-year-old ACC career record set in 1978 by former NC State All-America Ted Brown, and 2010 unanimous All-America linebacker Luke Kuechly, who led the nation in tackles per game in 2010 and is the NCAA’s leading career returning tackler in tackles per game. Harris and Kuechly tied for the highest amount of votes received as each were named on 49 ballots. Duke was represented by All-America placekicker Will Snyderwine (Potomac, Md.) and wide receiver Conner Vernon (Miami, Fla.), who led the ACC in 2010 in receptions per game.

Georgia Tech, Maryland, NC State and Virginia were represented on the team by one player each: Georgia Tech offensive guard Omoregie Uzzi (Lithonia, Ga.), who helped the Jackets lead the nation in rushing offense last year; Maryland linebacker Kenny Tate (Forestville, Md.), who moved from safety to linebacker this year and was named to the preseason watch list for the Butkus Award; NC State tight end George Bryan (Castle Hayne, N.C.), a 2010 John Mackey Award semifinalist; and Virginia cornerback Chase Minnifield (Lexington, Ky.), who has been named to the preseason watch list for the Thorpe, Nagurski, and Bednarik Awards.

The six selections who were named to the second team 2010 All-ACC squad were Conner Vernon and Will Snyderwine of Duke, Sean Spence and Ray-Ray Armstrong of Miami, Omoregie Uzzi of Georgia Tech and Blake DeChristopher of Virginia Tech.

Three members of the 2011 preseason team were repeaters from 2010 preseason squad in Montel Harris and Luke Kuechly of Boston College and George Bryan of NC State.

In all, eleven of the 12 ACC schools were represented on the preseason All-ACC team. A total of 51 ballots were turned in from the more than 290 media members in attendance at the 2011 ACC Football Kickoff.

The closest position vote turned out to be the center position where Miami’s Tyler Horn edged out Clemson’s Dalton Freeman (Pelion, S.C.), by one vote, 18 to 17.