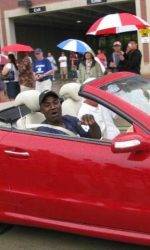 Miami, FL – The Orange Bowl Hall of Fame will induct three new members this year for their impact on the history of the FedEx Orange Bowl. College Football Hall of Famers Jeff Davis of Clemson, Charlie Ward of Florida State and Chris Zorich of Notre Dame will all be joining the Orange Bowl Committee as they are recognized during the AvMed Coaches Luncheon on January 4, 2010 at Jungle Island in Miami.

The trio will then be inducted into the Hall of Fame during the 2010 FedEx Orange Bowl on January 5, 2010 at Land Shark Stadium which features ACC Coach of the Year Paul Johnson and his Georgia Tech Yellow Jackets against Big Ten Coach of the Year Kirk Ferentz and his Iowa Hawkeyes.

Known as “The Judge,” Jeff Davis was the leader of the Clemson Tigers defense that began the 1981 season as an unranked afterthought but finished the year as a squad that became national champions and is regarded one of the more surprising stories in college football history. Davis played linebacker in 40 games for the Tigers, starting in 35, and had 30 games where he had double-digit tackles, including 22 of his final 23 games. As a senior, he was named the ACC’s Most Valuable Player, consensus All-American and concluded his career with a 24-tackle performance against Nebraska in the Orange Bowl for the national championship, where he was named the game’s MVP. His 175 tackles was an all-time single-season school record. Davis entered College Football’s Hall of Fame in 2007.

After two years as a punter and back-up, Charlie Ward finally received an opportunity at quarterback in 1992 leading the ‘Noles to an ACC title as conference Player of the Year, and FedEx Orange Bowl victory where he was named MVP. His senior year saw Ward lead FSU to a FedEx Orange Bowl victory over Nebraska, and the school’s first national championship, when he was again named the game’s MVP. During that season, Ward threw 27 scoring passes with only four being intercepted as he captured the Heisman Trophy and the Maxwell, Camp and O’Brien awards. At the time, his victory margin in the Heisman vote was the largest ever. Ward entered the College Football Hall of Fame in 2006.

Chris Zorich began his collegiate career at Notre Dame as a linebacker, but was moved to nose tackle early in his freshman year. Zorich became a first-team All-America as a sophomore, despite having played sparingly as a freshman. In his first game he had one and a half sacks and ten tackles against Michigan. He finished the year third on the team in tackles as Notre Dame went undefeated and won the national championship. Chris became a consensus All-American in 1989 as a junior. As a senior, Zorich won the Lombardi Award and was recognized as a unanimous All-America. In the final game of his collegiate career he was the Defensive Most Valuable Player of the FedEx Orange Bowl. Zorich was enshrined in the College Football Hall of Fame in 2007.

For information on tickets to the FedEx Orange Bowl or any other Orange Bowl Festival event, including the AvMed Coaches Luncheon, Budweiser Tailgate Party or Fan Fest, visit our Events Page or contact 305.341.4702.