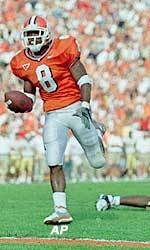 CLEMSON, S.C. – Eight teams who had winning records in the 2000 regular season will be on Clemson’s 2001 football schedule. The slate of games for Tommy Bowden’s third season as Clemson head coach was released on Tuesday.

Clemson will open the season with Central Florida on September 1 at Death Valley. This will be the first meeting between the two schools on the football field. Clemson won a basketball meeting against Central Florida last year. Central Florida had a 7-4 record in 2000, including a 40-38 victory at Alabama. They opened last season with a narrow 21-17 loss at Georgia Tech, another ACC team with a 9-2 record this year.

The 2001 season will be the 20-year anniversary of Clemson’s 1981 National Championship, so it is fitting that a school Clemson has not faced since that season will be on the 2001 schedule. Tulane will play at Clemson on October 6 in the first meeting between the two schools since Clemson’s 13-5 win in the Superdome on September 12, 1981. It will be Homecoming and Parent’s weekend at Clemson that day. The Green Wave had a 6-5 season in 2000, including victories and a 43-point scoring average in its last three games.

The game will have added significance in that Tulane was the school Tommy Bowden coached (1997 and 1998) prior to coming to Clemson. He led the Green Wave to an 18-4 mark in those two seasons, including an 11-0 regular season and top 10 national ranking in 1998.

Overall, Tulane has a 6-4 lead in the series. The Green Wave handed Clemson its only loss of the 1939 season, the year Clemson went 9-1 and defeated Boston College in the Cotton Bowl for the school’s first bowl victory. Tulane finished the 1939 season ranked fifth in the nation, while Clemson was ranked 12th in the final AP poll.

South Carolina rounds out the non-conference agenda in 2001 as Clemson will travel to Columbia for the 99th meeting between the two schools on November 17th. Clemson has won four games in a row in the series and has not lost in Columbia since 1987.

After an open date on September 8, Clemson will begin its ACC schedule on September 15 against Duke. Virginia comes to Clemson on September 22 under a new coach. Clemson’s first road game of the season will be at Georgia Tech on September 29. The Yellow Jackets have beaten Clemson four consecutive years by exactly three points.

After the Tulane game on October 6, Clemson will travel to NC State for a Thursday night prime time (ESPN) contest with the Wolfpack. This will be Clemson’s third Thursday night game in history, its second on the road. The Tigers have lost their previous two Thursday night games. Both Clemson and NC State will have just five days to prepare for that contest.

Clemson will have nine days to prepare for the North Carolina game on October 20 at Clemson. The Tigers will travel to Wake Forest on October 27th, the scene of a hard earned 12-3 Clemson win in 1999, Tommy Bowden’s first season at Clemson.

Bowden Bowl III will take place at Clemson on November 3. Bobby Bowden has won each of the first two meetings of father and son coaches. That will be Clemson’s home finale, the final game in Death Valley for 2001 seniors Woodrow Dantzler, Travis Zachery, Kyle Young, Alex Ardley and Chad Carson among others.

Clemson concludes the ACC schedule at Maryland on November 10, a team Clemson has beaten eight years in a row. The regular season concludes in Columbia with the aforementioned game with South Carolina.

“With eight teams on the 2001 schedule who had winning records in 2000, this looks to be a tougher schedule than the one we faced this past season,” said Head Coach Tommy Bowden. “Playing Central Florida, a team that won at Alabama and took Georgia Tech to the wire, will be a challenge right off the bat.

“I wish we could have had an open date more towards the middle of the schedule. We played 10 straight weeks last year, we will have to do it again in 2001. I don’t mind the Thursday night game, I wish we had an open date before and an open date after like we did in 1999. But, NC State is in the same situation, they have a game on October 6 also.

“The Tulane game will be interesting. There will still be some players on that team that we recruited. I am looking forward to seeing some familiar faces.”