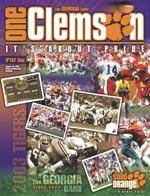 1977: Clemson Turns The Tide With Win Over Georgia

Is it possible for one game to change a football program? Could a regular-season game have that much impact? If one game can change a program’s direction, the 1977 Georgia game in Athens did just that for the Clemson Tigers. Consider the following:

With this list of facts, few who gathered in Athens that day or listened in to Jim Phillips or Larry Munson on the radio figured things would change. They thought the Bulldogs would roll over Clemson again, as they have so many times before.

This was the setting when Clemson and Georgia played on September 17, 1977. The facts of the rainy afternoon were pretty simple. It was a day for the defenses on both sides, as the wet ball hampered the offenses as well.

Clemson’s quarterback, Steve Fuller, had a tough first half, completing just one of six passes. Bulldog signal caller Jeff Pyburn did not fare much better, as Clemson intercepted two of his first-half passes. Clemson’s only score came in the third quarter. A Fuller to Jerry Butler hookup put the ball at the Bulldog 23. Two plays later and facing a third-and-10, Fuller hit Dwight Clark for a 17-yard gain to the six. Lester Brown punched the ball in from three yards out and the Tigers led 7-0.

After Georgia missed a 29-yard field goal during the fourth quarter, the Tigers took the ball on a six-minute drive and seemed to be on the verge of running out the clock. However, a Fuller fumble of a wet ball gave the Bulldogs new life with just 29 seconds on the clock and on their own 42-yard-line.

True to the form of this great rivalry, the Bulldogs mustered up one last charge. Pyburn passed behind the line of scrimmage to tight end Ulysses Norris, who then heaved a 51-yard pass to Jesse Murray to the Clemson seven-yard-line. Two plays later, the Bulldogs scored when Pyburn hit Norris in the back of the Clemson endzone to make the score 7-6. With just six seconds left to play, the Bulldogs lined up for a two-point conversion to go for the win. Georgia was penalized five yards on the conversion attempt for being offsides. Despite the extra five yards, Georgia still decided to again try for two points, but the pass fell incomplete in the Tiger endzone.

Following the effort, Vince Dooley, who was going for the 100th career win, congratulated the Tigers. “Clemson deserved to win. They were well-coached, well-prepared, and they came to play.”

In the other dressing room, there was bedlam. The Tigers had come away with a win they needed in the worst kind of way. This was the confidence boost they needed. A loss to the Bulldogs would have left Clemson at 0-2 and really questioning themselves. The trip back to Tigertown would have been a lot more than the 80 miles showed. However, following the 7-6 win and the victory cigars that Coach Pell made part of each victorious dressing room that year, the Tigers knew they had arrived.

From Coach Pell’s perspective, his first coaching win looked pretty good. “I’ve been in football a pretty good while,” he said. “But I’ve never been around a group of men that worked harder and paid more for the price to get what they’ve got today.”

One of the leaders was junior linebacker Randy Scott. Scott was named ACC Defensive Player-of-the-Week for his efforts that afternoon. Scott was credited with 14 tackles, an interception. and a forced fumble. Being a native of Waycross, GA made the win against Georgia even more special for Scott.

“That game gave us the realization that we belonged,” said Scott recently. “Georgia was the defending SEC Champions and had a great team. We knew we could play after beating them in Athens. The year before, they had beaten us 41-0 with Ray Goff as the quarterback. They had really beaten us like a drum. The win in Athens gave us the confidence to become a good team.”

Scott, who now makes his home in Gainesville, FL and was selected as Florida’s Teacher-of-the-Year last year, also said the Georgia game was a crucial one. “We should have won the Maryland game. After that game, we felt like we might be heading for another losing season.”

Scott was also quick to give credit to his head coach with pulling out a real motivational tool prior to the Georgia game. “Coach Pell brought in a guy who had been badly injured in Vietnam and had him speak to us in the lockerroom prior to that game. He really got the team pumped up.”

The speaker was one of the Marine’s most decorated veterans, Clebe McClary.

Scott also brought to light one of those moments that is funny now but was not funny then. “When Georgia was going for the two-point conversion to win the game, we only had 10 men on the field. I was the captain and I was yelling trying to get a timeout, but the play went on. Steve Gibbs, one of our ends, dropped back on their tight end and broke up the play. It was a great play by him.”

From that win over the Bulldogs, Clemson went on to post an 8-3-1 record and earned a trip to the Gator Bowl. The following year, the Tigers were 11-1, won the ACC Championship, and defeated Ohio State in the Gator Bowl. From the success of 1977 and 1978 came recruits like Perry Tuttle, Homer Jordan, Jeff Davis, and William Perry. That group brought Clemson its national championship in 1981 and a rebirth of Tiger football.

One of the best descriptions of the reaction to the Clemson win over the Bulldogs came from noted Atlanta Journal-Constitution writer Lewis Grizzard. He wrote about Pell’s reaction to the win.

Could there be a better description of the emotion surrounding the Tigers win? Would it be a stretch to say this was one of the most important wins in Clemson football history? I think one could make the case.

Al Adams served as assistant sports information director at Clemson from 1973-77 and attended the 1977 Clemson-Georgia game as Bob Bradley’s assistant. He later founded the Orange & White and is now a State Farm Insurance Agent in Forest City, NC.