Editor’s Note – This is the 125th season of Clemson football. To commemorate the first 125 years, Tim Bourret is writing articles this year on some of the most important moments in Tiger history. Below is the third installment of the series.

On many occasions during my time as Clemson’s sports information director, I received a call or two from a producer who was working on the opening of his broadcast for the Tiger football game the following weekend.

Many times, one of the questions would be, “Where can I find video of Brent Musburger calling your stadium entrance, ‘the most exciting 25 seconds in college football?’

“I have looked everywhere.”

It is the most famous quote about Tiger football in history. The story of how it came about is the story of a brilliant, old-school Clemson publicist. When you arrive at Death Valley and see Bob Bradley’s name on the North upper deck façade as a member of the Clemson Ring of Honor, this story is one of the reasons.

The first game from Memorial Stadium broadcasted nationwide took place on Sept. 13, 1985. The Clemson vs. Georgia rivalry was in the middle of a great run, and in those days, CBS had the rights to the game at Clemson.

With CBS coming to town for a national game, that meant Brent Musburger and Ara Parseghian would provide the commentary for the network.

As is the case with any broadcast crew today, the announcers met with the home team players and coaches the day before the game. On that Friday, after Musburger and Parseghian met with Danny Ford, Clemson’s head coach invited the announcers to come to the Friday afternoon walkthrough in the stadium.

There were not a lot of trade secrets available at these walkthroughs in the 1980s. It was more of a day for recreation for the linemen. Prior to a Saturday game, Head Coach Dabo Swinney has his Tigers actually walk through plays that are to be run on gameday.

During this walkthrough on Sept. 12, 1985, Musburger was chatting with Bradley and asked about the tradition of running down the Hill. “Mr. B” proceeded to give him his long version with every detail. 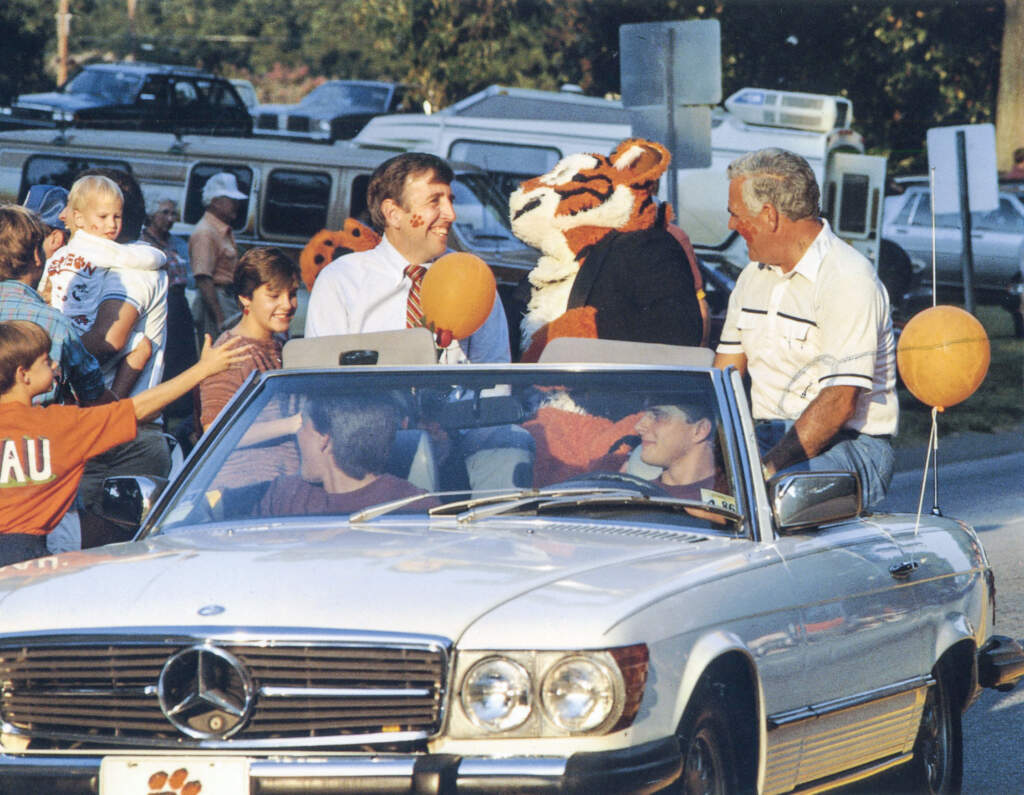 During a pause in the conversation, Musburger looked up to the Hill and said, “It’s the most exciting 25 seconds in college football.”

As Bradley’s understudy at the time, I was there and heard him say it. There was not any acknowledgement by anyone around…not even an “oh wow” moment.

The next day on the broadcast, Musburger never referenced the tradition as “the most exciting 25 seconds in college football.”

However, when Bradley and I got back to the office that late Friday afternoon, he said to me, “Brent gave us a great quote. We are going to use that.”

It was too bad that we did not have Twitter and cell phones in those days. Think of the posts, complete with pictures from cell phones, we could have communicated just seconds after Musburger uttered the phrase.

The quote made its rounds the old-school way. Bradley repeated the story to the media many times that year.

As Clemson’s program won three straight ACC titles and had three consecutive top-20 finishes from 1986-88, there were more and more features written about the program, and Bradley gave the media that quote.

While the quote received more and more attention, Musburger still never said it on air the rest of his time at CBS.

Fast forward to the summer of 2013, and ABC producer Bill Bonnell called me in June and wanted to do a “blowout” feature on the Tigers’ stadium entrance prior to its coverage of the season-opening Clemson vs. Georgia game. He had cameras everywhere, and they covered it from the time the Tigers left the locker room and boarded the buses until they landed on the floor of the stadium.

It is without a doubt the best feature on running down the Hill, where it lives on YouTube.

Fittingly, Musburger was on the call that 2013 night with Kirk Herbstreit. Bonnell wrote into the script Musburger saying “the most exciting 25 seconds in college football.” Mike Money arranged to put Musburger on the public address system so the fans in attendance could hear as well.

It would be the first time he said the quote on a broadcast from Clemson. Ironically, it was the last time he called a game in Death Valley before his retirement at the end of the 2016 season.