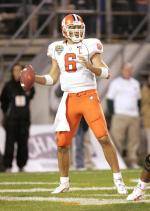 Whitehurst, who led Clemson to 25 victories over his career, second in school history, finished fifth in the nation in completion percentage with a school record 67.4 mark. Whitehurst complete229 of 340 passes for 2483 yards and 11 touchdowns in his final year leading the Tigers. The 67.4 completion percentage broke Brandon Streeter’s Clemson record of 63.1 percent set in 1999 and was seventh best in ACC history.

The Tigers ranked 11th in the nation in scoring defense allowing just 17.58 points per game, the highest national ranking since the Tigers were 10th in scoring defense in 1995 and the fewest allowed by a Tiger team since 1994. The Tigers ranked 20th in total defense, Clemson’s best ranking in that area since a #18 figure in 1997. Clemson was 18th in pass efficiency defense and 25th in rushing defense. The Tigers were also 25th in the nation in sacks and 13th in tackles for loss per game.

Clemson’s outstanding defense in the Champs Sports Bowl certainly contributed to the strong final numbers. The Tigers held Colorado to just 17 yards rushing and 124 yards of total offense. Both rank as the best defensive performances in Clemson history and as the top defensive numbers by any of the 56 teams that played in a bowl game in 2005.