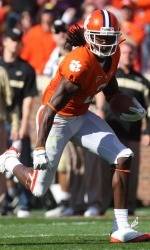 Clemson freshman receiver Sammy Watkins is one of 10 semifinalists for the Fred Biletnikoff Award. The award is presented each year to the top wide receiver in college football. The other semifinalists for the award are Keenan Allen of California, Justin Blackmon of Oklahoma State, Ryan Broyles of Oklahoma, Patrick Edwards of Houston, Michael Floyd of Notre Dame, A.J. Jenkins of Illinois, Jordan White of Western Michigan, Robert Woods of Southern California and Kendall Wright of Baylor.

Watkins has been honored by the ACC seven times this year, four times as ACC Rookie of the Week and three times as the ACC Receiver of the Week. That is a record for ACC honors in one season for a Clemson player.