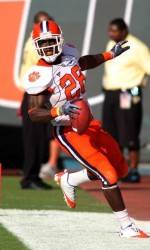 ATLANTA, GA — Four nominees for the AT&T All-America Player of the Week award have been announced after the eighth week of college football action, and AT&T is relying on fans to determine who rules the gridiron.

Based on outstanding performances over the weekend, University of Alabama guard Terrence Cody, University of Nevada quarterback Colin Kaepernick, San Diego State University wide receiver DeMarco Sampson and Clemson University running back C.J. Spiller have been selected by a panel of analysts from ESPN as this week’s top candidates. Fans can text message** VOTE to 345345 on their wireless phone to opt in for the chance to vote.

“AT&T is excited to see who the fans will choose this week as the AT&T All-America Player of the Week,” said Tim McGhee, executive director, AT&T corporate sponsorships. “Each player had an outstanding game, but the fans will be the ones deciding who is crowned the best.”

Fans have until 11:59 p.m. ET on Wednesday to submit their votes. The winner will be announced during Thursday’s ESPN College Football Primetime Presented by Applebee’s. Standard text messaging rates apply.

There is no limit on fan voting and each vote counts as one entry into a sweepstakes to win a trip to the 2010 Bowl Championship Series National Championship game in Pasadena, Calif. Full sweepstakes rules can be found at www.espnallamerica.com/rules.aspx.

In December, four finalists for the AT&T All-America Player of the Year Award will be announced during a one-hour special on ESPN in conjunction with the announcement of the AT&T ESPN All-America Team as selected by the Football Writers Association of America. Fans will then get a chance to say who the best player in the nation is by voting for the AT&T All-America Player of the Year through the BCS. Voting ends at 11:59 p.m. ET on Jan. 5, and the winner will be announced during the BCS National Championship game on ABC on Jan. 7.

Additionally, AT&T customers can view video highlights and photos of each week’s candidates and track select teams through AT&T’s wireless NCAA Football Portal, which is accessible on AT&T handsets equipped with AT&T MEdiaTM Net by launching the application and clicking through to the sports category.