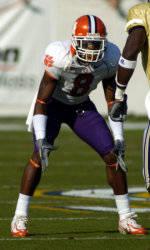 MOBILE, Ala. – A pair of top NFL draft prospects from Clemson – quarterback Charlie Whitehurst and All-American defensive back Tye Hill – will play in the 2006 Senior Bowl, presented by Food World, game officials have announced on Thursday.

A dominating shut down corner, Clemson’s Hill was one of three finalists for the 2005 Thorpe Award, presented annually to college football’s top defensive back.

A 5-10, 180-pounder from Saint George, S.C., the consensus first-team All-American had seven pass break-ups, three interceptions and a team-leading 10 passes defended during his outstanding senior campaign. He also led the ACC and ranked third in the nation in passes defended in 2004 with 21.

Whitehurst finished his career the holder of 42 different Clemson passing and total offense records, including career passing yardage with 9,656, career completions with 817 and career touchdown passes with 49.

With the 19-10 victory over Colorado in the Champs Sports Bowl, he also finished with 25 victories, second in Clemson history, including eight fourth-quarter comeback wins during his career, tied for first among all active Division I quarterbacks in 2005.

In 2005, 10 Senior Bowlers were chosen in the first-round of the NFL Draft and 83 players were drafted overall. The 2006 Senior Bowl will kickoff at 3:00 p.m. on January 28, and the game will be nationally televised by ESPN.

The Senior Bowl is also a non-profit, charity event that, together with its charitable partner Food World, distributed over $1.2 million to charities in 2005. Tickets sell for $24, $18 and $12 each and can also be purchased by calling 251-432-4109 or by accessing the bowl’s website at www.seniorbowl.com.