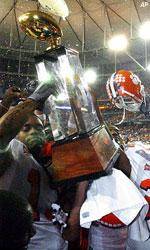 Tigers Take Peach Bowl With 27-14 Win Over No. 6 Tennessee

ATLANTA – Given more than a month to prepare, Clemson coach Tommy Bowden had plenty of tricks in his playbook. None was bigger than unleashing little-used Chad Jasmin.

Jasmin, a fullback known mostly for his blocking, ran for a career-high 130 yards and a touchdown, helping the Tigers upset No. 6 Tennessee 27-14 Friday.

“Chad Jasmin found the holes, and sometimes simply ran over players,” Bowden said. “That was a little demoralizing for Tennessee.”

In 45 previous games, Jasmin’s best effort was 83 yards in the 2001 Humanitarian Bowl. He got more than 80 just one time this season – running for 81 in a victory over North Carolina – and had only 393 through 12 games.

The Volunteers (10-3) lost the Peach Bowl for the second straight season, although the score was a bit closer than the 30-3 rout by Maryland a year ago. In this one, they committed 10 penalties, including two for pass interference, two for unsportsmanlike conduct and two for roughing quarterback Charlie Whitehurst.

James Wilhoit also missed a 35-yard field goal in the third quarter that would have brought Tennessee within seven points. The miss came at the end of a 17-play, 62-yard drive, and that pretty much was the last chance for the Volunteers.

“On the penalties, you have to hope you have better control,” Tennessee coach Phillip Fulmer said. “The late hits on the quarterback were close. You want your guys to be aggressive.”

The Tigers didn’t need much help in the first half, an exciting back-and-forth 30 minutes that culminated with a “fumblerooskie” touchdown run by Browning, an 8-yard score that made it 24-14.

Clemson opened in its unique hurry-up offense, with Whitehurst calling most of the plays at the line of scrimmage, after first checking with the coaching staff. Tennessee tried to ruin the strategy by waiting until the last possible moment to line up, but it rarely helped.

“When you’re playing a running offense like they have, you’ve got to score as much as you can and as often as you can,” Whitehurst said. “We scored early, and they didn’t respond for a while.”

Casey Clausen, a four-year starter playing in his final game for the Volunteers, threw for 384 yards – just nine off his career high – and had two touchdown passes. But Tennessee got little from its running game, finishing with 38 yards on 26 carries.

“You can draw out all the X’s and O’s, but it comes down to who makes the plays, and they did,” Clausen said.

Leading rusher Cedric Houston didn’t start with the Volunteers going with a three-receiver set, then fumbled on his first carry. Leading receiver James Banks was suspended from the first half for a violation of unspecified team rules, but his absence hardly was glaring.

Clemson jumped to a 7-0 lead on the opening possession, going 80 yards in only 2:15, a drive capped by an 8-yard run by Coleman. He took a pitch from Whitehurst and leaped over cornerback Gibril Wilson at the 2, giving the Tigers a TD on their initial drive for the third consecutive game.

“I was confident we could run on them,” Jasmin said. “Our line has really improved over the course of the season.”

Derrick Hamilton set up Hunt’s first field goal with a 58-yard punt return, during which he started right, then reversed field and ended up racing down the left sideline.

A TD pass from Clausen to Chris Hannon made it 10-7 before Jasmin’s touchdown in the second quarter extended the lead to 17-7.

“One of the keys to this game was the fact that when Tennessee scored and we answered, and then we scored and it was not answered,” Bowden said. “That gave us confidence.”

In the second quarter, Wilson intercepted Whitehurst’s pass, and the turnover led to Clausen’s second scoring pass, this one a 30-yarder to Mark Jones. He beat the coverage of Justin Miller and Travis Pugh for the score.

But the play of the half came from the Tigers. Facing third-and-goal from the 8, they called a timeout, then quickly huddled near the line of scrimmage. They hurried to the ball in a box formation, with Whitehurst joined in the backfield by three other players.

He took a snap in the shotgun, then leaned forward and reached through Browning’s legs and handed him the ball. After pausing for a moment, Browning raced to the left while the rest of the backfield went right, and he easily scored for a 24-14 lead.

The game was sponsored by Chick-fil-A.