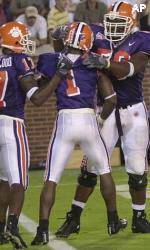 The Tigers (3-1, 1-0 Atlantic Coast Conference) won their third in a row by throwing deep against Georgia Tech (1-3, 0-2), which fell apart after splitting two well-played games against powerhouses Auburn and Florida State.

Whitehurst threw touchdown passes of 9 yards to Tony Elliott, 12 yards to Kevin Youngblood and 33 yards to Airese Currie – the last with just 12 seconds left in the first half to give the Tigers a commanding 23-3 lead.

Whitehurst added a rushing touchdown late in the game, sneaking over from the 1 to give Clemson its largest victory over the Yellow Jackets since a 73-0 rout in 1903. Maybe the uniforms helped. The Tigers wore purple jerseys for the first time since the 1992 Citrus Bowl.

The margin was quite a change from the last seven years. From 1996-01, every game was decided by a field goal. Last year, the Tigers won by a slightly more comfortable margin, 24-19.

This one wasn’t even close.

Right from the start, it was clear that Clemson had decided to use its talented group of receivers to exploit the Yellow Jackets’ suspect secondary. Whitehurst tried to go deep to Currie on the Tigers’ first play from scrimmage, overthrowing the open receiver.

But the Clemson sophomore soon got rolling and finished 23-of-38. The Tigers also rushed for 138 yards, finishing with 436 total yards.

In the second quarter, Whitehurst put on a passing clinic. He found Derrick Hamilton all alone over the middle for a 47-yard reception, leading to the scoring pass to Elliott. The receiver was closely guarded by Reuben Houston, but leaped up and ripped the ball away from the cornerback to make it 10-0.

On Clemson’s next possession, Whitehurst hooked up with Youngblood on a 44-yard pass, the 6-foot-5 receiver jumping over 5-10 Jonathan Cox to bring it down. Four plays later, Whitehurst completed a quick pass to Youngblood, who bounced off one defender and dragged Cox into the end zone for a 17-0 lead.

The Yellow Jackets finally scored on Dan Burnett’s 20-yard field goal with 41 seconds left in the half, having squandered first-and-goal at the Clemson 10.

As it turned out, Georgia Tech left too much time on the clock. After Hamilton returned the kickoff 39 yards, Whitehurst completed a 22-yard pass to Youngblood, then found Currie all alone down the middle of the field for the third TD pass of the quarter. Aaron Hunt missed the extra point after a delay penalty, but it didn’t matter.

Georgia Tech couldn’t get anything going offensively, its futility culminating when freshman quarterback Reggie Ball was sacked in the end zone for a safety by Maurice Fountain and Vontrell Jamison in the third quarter.

Ball had a miserable game against the blitzing Tigers, completing just 19-of-42 for 248 yards. He had to go it alone; the Yellow Jackets rushed for only 45 yards and Ball was sacked five times.

Clemson put together its two longest runs of the season on back-to-back plays in the fourth quarter. Kyle Browning broke loose for 17 yards, then Duane Coleman scampered 25 yards to the end zone to make it 32-3.