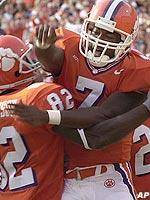 CLEMSON, S.C. – Bernard Rambert ran for two second-half touchdowns and Clemson’s defense created five turnovers – including a game-saving fumble – as the Tigers rallied for a 31-23 victory over Wake Forest on Saturday.

After Rambert’s second touchdown with 3:07 remaining gave Clemson a 31-23 lead, Wake Forest had one last chance at a tying score.

But as Chris Barclay headed to the end zone, he was hit by Brian Mance at about the 5-yard line and lost control of the ball. It rolled through the end line for a touchback with 1:15 left and Clemson ran out the clock to stop a two-game losing streak.

Quarterback James MacPherson had gone 159 passes this year without an interception for the surprising Demon Deacons (5-3, 2-3 Atlantic Coast Conference) before the Tigers (4-3, 2-2) rattled him into throwing three interceptions in the second half.

The Tigers had no answer for Wake Forest’s powerful running game, which came into the game ranked 15th in the nation. The Deacons gained 364 yards rushing, their most since 355 yards against William & Mary in 1956.

Wake scored on five of its first seven possessions, then not at all after Williams’ TD.

MacPherson’s first interception stopped one third-quarter drive. Then Travis Pugh recovered a fumble by Cornelius Birgs on the next possession.

Rambert closed it to 23-21 with a 2-yard score. MacPherson threw his second pick on the next drive.

Hunt appeared ready to add a field goal when Clemson’s offense stalled at Wake’s 12, but holder Jeff Scott dove ahead on the fake for a first down. Rambert finished things off with a second scoring run.

Wake Forest outgained Clemson 522-280 but lost for the 23rd time in its last 26 contests against the Tigers.

Wake Forest used three Matt Wisnosky field goals to take a 16-14 lead at the half.