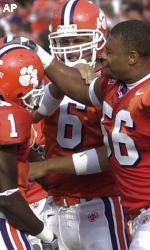 CLEMSON, S.C. – Charlie Whitehurst threw for 301 yards and Kevin Youngblood tied a career-high with 10 catches for 100 yards as Clemson beat Furman 28-17 on Saturday.

Getting a win over a Division I-AA opponent was reassuring for the Tigers (1-1), who entered the game off a 30-0 loss to Georgia last week.

But Clemson struggled again on the ground. Furman outgained the Tigers 51-45 in the first half, and Clemson ended the game with just 124 yards rushing.

Nonetheless, the Tigers started well. They began the game with a methodical 85-yard scoring drive, mixing six passes with eight runs. Whitehurst went 6-for-6 on the drive, and Kevin Youngblood caught five of those passes, including a 26-yard grab on a third-and-12. Chad Jasmin’s 5-yard touchdown run gave the Tigers a 7-0 lead.

After stuffing Furman (1-1) on three straight plays, Whitehurst found Airese Curry streaking down the right side, hitting him in full stride for a 72-yard touchdown pass and a 14-0 lead.

But after that, Clemson could only score on a defensive touchdown and a fluke play in which an offensive lineman caught a deflected pass, fumbled it, and a tailback picked it up and run for a score.

Whitehurst finished 23-for-31, while Duane Coleman led Clemson with 50 yards on 14 carries and Derrick Hamilton had five catches for 60 yards.

Furman receiver Brian Bratton ran 11 times for 41 yards and caught two passes for 33 yards to lead the team in both categories. Bo Moore was 10-of-15 for 80 yards and ran for 12 more on 13 carries for the Paladins.

Furman’s highlight of the game came when Moore faked a handoff, then faked a reverse before finding a wide-open Bratton in the end zone for a 20-yard TD pass to cut the lead to 14-7. It was the Paladins’ first touchdown against Clemson in eight games in the series, dating back to 1961.

Bratton scored on a 3-yard run in the fourth quarter and added a 40-yard field goal to give Furman more points Saturday than it had in its previous eight games against the Tigers.