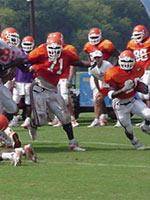 Clemson, SC – It was a day of good news for the Clemson defense on Saturday. First, the Tigers were told that all tests regarding a possible heart ailment for starting defensive tackle Nick Eason were negative. Then, the defense held the upper hand for most of a two-hour scrimmage in Death Valley.

Eason had extensive cardiac tests on Friday and Saturday, but all results were negative and he should return to practice by the end of this coming week. He should be able to play against Georgia in the season opener on August 31 in Athens. “That was certainly good news,” said Clemson Head Coach Tommy Bowden. “Nick is a leader, a veteran, who is a key to our defense. He will miss some practices, but he knows what we are doing. I am not worried about him being ready for the opener.”

Bowden did say however that the continued absence of wide receiver Kevin Youngblood and defensive tackle Todd McClinton does cause him concern. Youngblood continues to miss time with a sprained foot, while McClinton is out with a pulled hamstring. Both are expected back next week.

“I had hoped that Kevin and Todd would be back for this scrimmage. We might have to prepare to play the Georgia game without them. They both need the reps. Kevin did not play at all last year and Todd is at a new positions. We are looking at J.J. McKelvey and Kelvin Grant seeing the time at Kevin’s wide receiver position if he does not get back soon.” Bowden said that Trey Tate and Eric Coleman will gain playing time from McClinton’s absence.

Also missing the scrimmage was Altroy Bodrick, Tye Hill and Dustin Fry. Bodrick is coming back from a torn ACL and went through all the practices during two-a-days this week. He had some soreness so he was held out of the scrimmage. Hill suffered a pulled hamstring in practice on Friday. Fry has missed the last week with a dislocated kneecap. All should return next week.

Bowden singled out some defensive players during his post-scrimmage meeting with the media. “Khaleed Vaughn had an outstanding scrimmage. He made plays and was hustling the entire day. Moe Fountain also played well at defensive end. I was also impressed with Brandon Jamison and Kelvin Morris, they both made some big plays on defense.” Vaughn and Fountain both had three tackles for loss in the first scrimmage of the year in Death Valley. Rodney Thomas, John Leake and Trey Tate all had fumble recoveries. Jamison had a pair of tackles for loss.

The offense had three turnovers, all lost fumbles. Bowden felt his team moved the ball, but obviously was disappointed by the turnovers. “Derrick Hamilton made a nice run, then fumbled at midfield. We had come off the one-yard-line. We put Derrick on the bench after that fumble and he didn’t come back.

“We also had a center-quarterback exchange fumble at the six-inch-line after a 70-yard drive by the offense. We have to correct that.” Derrick Hamilton teamed up on a 35-yard touchdown pass in the first half of the scrimmage. Bernard Rambert also had a score later in the scrimmage. Aaron Hunt had field goals of 40 and 36 yards, while Cole Chason had a 37-yarder.

“Overall, from what I saw today we are not ready for Georgia, but we have two weeks to prepare. We will look at the film and come back ready to go on Monday.

“You do have to be realistic in that we lost a lot of veterans on offense and this was the end of a full week of two-a-days, but we obviously can’t have turnovers on offense. It was good to see the defense force some turnovers. We knew one side of the ball would come away from this scrimmage mad.”

The Tigers will take Sunday off, then come back for two practices on Monday and Tuesday. School will begin on Wednesday.