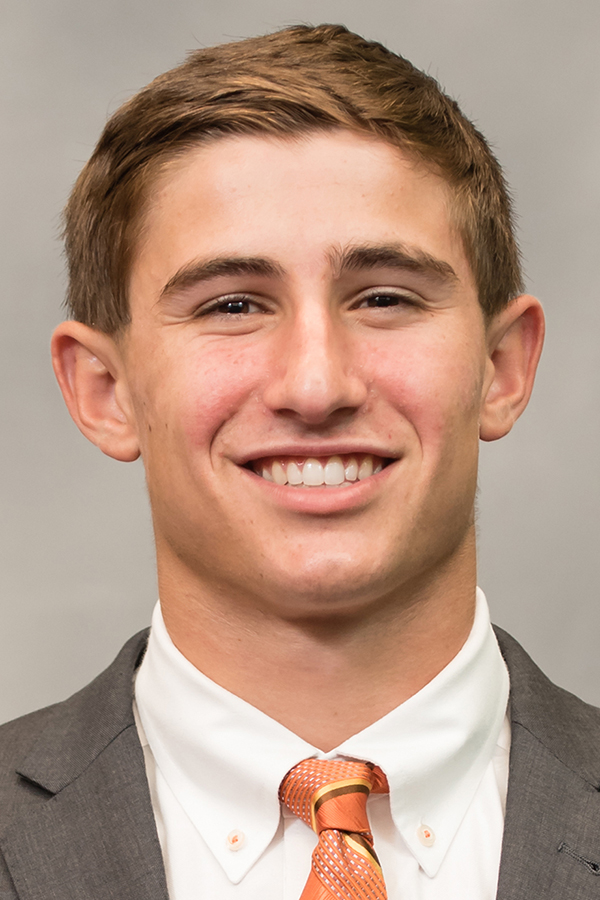 Original walk-on and son of head coach Dabo Swinney … completed his five-year Clemson career from 2017-21 having  caught 35 passes for 195 yards and a touchdown in 586 offensive snaps over 69 career games with three starts … his 69 career games played tied for the school and modern FBS record … also rushed for a six-yard rushing touchdown among his four career carries for 11 yards … was the team’s starting holder since his debut season in 2017 … in his career spanning 2017-21, Clemson scored 565 points on placekicks, including field goals and PATs, and he held for 558 of those 565 points … including a receiving touchdown vs. Louisville in 2018 and a rushing touchdown vs. UConn in 2021, he touched the ball for 570 total points for Clemson in his career.

2021: Caught seven passes for 27 yards in 162 offensive snaps over 13 games, including starts in the final three games of the season … also added a six-yard rushing touchdown on special teams on his lone rushing attempt of the season … Peter Mortell Holder of the Year finalist … contributed on special teams vs. No. 5 Georgia … caught two passes for 11 yards vs. SC State … played in his 60th career game at NC State, jointly breaking the school record for games played alongside Will Spiers and James Skalski … shared team special teams player of the game honors with kicker B.T. Potter and snapper Jack Maddox vs. Boston College after Potter went 4-for-4 on field goals in the game … held for a 500th career placekicking point with Clemson’s final PAT vs. Florida State, sharing team special teams player of the game honors … scored his first career rushing touchdown on a six-yard fake field goal vs. UConn, sharing special teams player of the game honors … made first career start at wide receiver vs. No. 13 Wake Forest, catching a two-yard pass and becoming the first son of a Clemson coach to start a game on offense or defense since Frank Howard’s son Jimmy in 1963 … made two catches at South Carolina … played in his 69th career game against Iowa State, extending his FBS record for career games played (shared with James Skalski, Will Spiers and Nyles Pinckney) and catching one pass for 11 yards.

2020: William V. Campbell Trophy semifinalist … All-ACC Academic Team selection … caught seven passes for 29 yards and had a nine-yard punt return in 127 snaps over 12 games … caught a three-yard pass in games at Wake Forest and vs. The Citadel … added a reception vs. Virginia … caught two passes for 13 yards at Georgia Tech … shared special teams player of the game honors at No. 4 Notre Dame as the battery of he, long snapper Jack Maddox and kicker B.T. Potter helped produce 16 points on four field goals and four PATs … gained 10 yards on two receptions vs. Pitt.

2019: Recorded 12 catches for 94 yards in 146 offensive snaps over 15 games while also serving as the holder on placekicks in all contests … posted a four-yard reception and eight-yard punt return vs. Georgia Tech … caught two passes for 24 yards vs. Charlotte … gained four yards on a reception at Louisville … rushed for eight yards vs. Boston College … caught three passes for 11 yards vs. Wofford … gained 13 yards on two receptions at NC State … rushed once vs. Wake Forest … gained 38 yards on three receptions vs. No. 22 Virginia in the ACC Championship Game.

Before Clemson: Top receiver for Daniel High School in Clemson, where he had 48 catches for 603 yards and six scores in 2016 … led team in total receptions, yards and touchdowns … had at least two receptions in every game in 2016 … named all-region as a senior, he was team offensive MVP and one of the team captains … had strong early-season game against rival Seneca with six receptions for 73 yards and a touchdown … in win over Ninety Six, had career highs in receptions (7), yards (118) and touchdowns (2) … had longest reception of the year on a 53-yard scoring catch against Wren … had over 900 all-purpose yards including kick returns … as a junior had 33 receptions for 420 yards and five touchdowns … played four years of football, two years of basketball and four years of baseball … played wide receiver, cornerback and various positions on special teams, including holder, at Daniel High School … coached by Jeff Fruster.

Proud Parents Dabo and Kathleen Swinney (and uncle Tracy!) have a message for Will Swinney, who scored his first career TD today. #ClemsonFamily is not just a phrase. pic.twitter.com/Pu8A6qYeMc