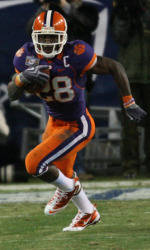 CLEMSON, SC — C.J. Spiller continues to pile up awards, even after his Clemson career is over. On Friday, the now Clemson graduate was named a first-team All-American by ESPN.com for his performance in 2009 and was named to Rival.com’s All-Decade team of College Football.

Spiller was one of four players who were seniors in 2009 to make the All-Decade team. The others were Tim Tebow of Florida at quarterback, Jermaine Gresham of Oklahoma at tight end and Ndamukong Suh of Nebraska at defensive tackle.

Spiller made first-team All-American according to every team announced this year, just the third unanimous All-American in Clemson history. The others are Terry Kinard (1982) and Gaines Adams (2006).

Spiller was named to both teams as a kick returner. This year he set an ACC record with four kickoff returns for touchdowns, giving him seven for his career, an NCAA record. He had five total kick returns for scores this year as he also had a punt return for a score against Boston College.

As a running back, Spiller had 1212 rushing yards and 503 in receiving yards, the first player in ACC history with at least 1000 yards rushing and 500 receiving in the same year.