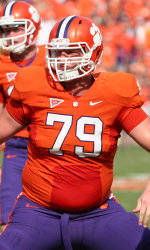 Price is the first Clemson original walk-on to make any All-ACC team as a non-kicker since Rob Bodine in 1991. He started 12 of the 13 games this year and played 777 snaps. He was a big reason Clemson established school records for total offense and points scored this year.

Branch led the ACC in sacks and was a second-team All-America selection by CBS. Thompson was the anchor of the interior of Clemson’s defensive line. He has 73 tackles, fourth on the Clemson team and his 18 quarterback pressures rank first.