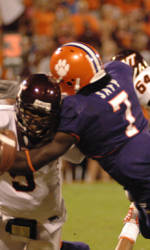 Sapp is one of four ACC players on the list, as he is joined by Everette Brown of Florida State, Michael Johnson of Georgia Tech, and Willie Young of NC State. Former Tiger Gaines Adams was a finalist for the award in 2006.

Sapp had 52 tackles, including 10 tackles for loss and five sacks last year for the 9-4 Tigers. He was a big reason Clemson ranked in the top 10 in the nation in scoring defense and total defense. He started all 13 games and had a team best 22 quarterback pressures. The native of Bamberg, SC ha played 26 consecutive games over two years, 13 as a starter. He has nine career sacks, eighth among active ACC players.

The winner will be announced on December 10.