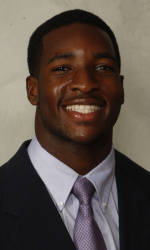 CLEMSON, SC – Rashard Hall, the leading tackler on Clemson’s 2011 football team, had knee surgery earlier this week and will not participate in spring practice.

Hall originally injured the knee in the season opener last year against Troy. He missed only the Wofford game, the second game of the year. He played each of the last 12 games a year ago knowing he would have to have surgery after the season. Hall, who will be a senior next year in terms of eligibility, already has his undergraduate degree and will play in 2012 as a graduate student.

The native of St. Augustine, FL played 799 plays on defense last year and is a veteran of 40 games in the previous three years, 31 as a starter. He had a season high 10 tackles against Wake Forest and South Carolina last year. He had at least eight tackles in each of the last five games a year ago.

Hall enters his senior year with 217 career tackles and 10 interceptions. He has more interceptions and has forced more turnovers (13) than any active player on the 2012 team.