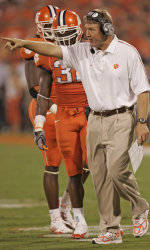 Note: You can read this and other feature articles in tomorrow’s game program. Be sure to pick up your copy.

Clemson Defensive Coordinator Vic Koenning has had the opportunity to be on the sidelines of some of college football’s greatest venues. Whether it is Louisiana State, Michigan, Tennessee, or Florida, Koenning has seen pageantry that is the best college football has to offer.

Clemson’s Death Valley is another one of those special places for college football, and the spectacle we will see today with a top-25 Boston College team, as the opponent will be no different. But Koenning, by his choice, has not experienced one of the most unique entrances in all of sports.

Koenning, in his first year directing the Tiger defense, coaches from the Death Valley sidelines (as opposed to the coaches box at press box level), but has declined the opportunity to run down the Hill, called by many “the most exciting 25 seconds in all of college football.” It is not Koenning’s fear of heights that has led him to take the short walk from the locker room to the field. He is just waiting to earn the privilege.

“I just don’t think I have done anything yet to earn the right to rub Howard’s Rock and run down the Hill,” he said. “A player has earned that right by coming here. I have a set of goals for this defense to achieve. When we have achieved those goals, I look forward to taking part in the run down the Hill.”

Spend just a few minutes watching the Owasso, OK native, be it on the practice fields or on the sidelines at Death Valley, and it easy to see and hear how he works to make this Tiger defense the best it can be. Determined and fiery would be two adjectives used to describe his coaching style. But as this defensive unit adapts to his style of play, the fiery side of Koenning will be less apparent.

“I like to be calm and laid back when I’m on the field,” stated Koenning. “Many times, players are on such an emotional roller coaster, it helps to be even-keeled. But at this point and time, there needs to be a hammer. If I have to be that hammer, which I don’t like, I will. But with that hammer, you have to be there to hug as well.”

Senior cornerback Tye Hill has seen both the hammer and hug-coaching style displayed by Koenning. The Saint George, SC native has enjoyed the experience.

“He does yell and scream, but he also is the first guy to slap you on the back when you do something well,” said Hill. “Coach Koenning is what a player makes him. One of the things I really like about him is that he will not only tell you what you did wrong, but how to correct it.”

Koenning’s hammer and hug approach appears to be taking hold. In fourth quarter wins over #17 Texas A&M and Maryland, the Clemson defense forced a key stop that afforded Jad Dean and Reggie Merriweather the opportunity to complete fourth-quarter comebacks against the Aggies and Terrapins, respectively.

“Our defense can be very good, or it can be very average,” said Koenning. “We have talent and ability to do great things. It is just a matter of working hard and doing the right things in preparation.”

When Koenning talks of hard work and dedication, he speaks from experience. Following a stellar high school career in Owasso, he earned a scholarship and was a three-year starter at linebacker for Kansas State. He served as team captain for the 1982 Wildcat squad that earned a bid to the Independence Bowl, the first postseason bid in school history. He was the recipient of the Paul Coffman Award, which is presented each year to the Wildcat who displays the most outstanding leadership.

Koenning went on to pursue a pro career with the Denver Broncos, Oklahoma Outlaws (USFL), and Green Bay Packers from 1983-86 before starting work on his master’s degree at Memphis.

“I learned the value of hard work and dedication at an early age,” recalled Koenning. “I had parents and coaches who pushed me to be the best I could possibly be. I was very blessed to be brought up in an environment that demanded responsibility and attention to detail. From high school all the way to professional football, I was always one of those guys who was chosen as captain. That is due to how I was brought up.”

Koenning’s 2004 Trojan squad forced 32 turnovers to rank second in the nation behind National Champion Southern California. It marked the third time in his five years as a defensive coordinator that his defense ranked in the top six in the nation in turnovers forced.

His experience as a head coach has proved valuable in his role of defensive coordinator.

Following the 2004 season at Troy, Koenning had several opportunities to move up in the college ranks. In fact, one day after he accepted his current job at Clemson, Louisiana State called to inquire about a move to the other Death Valley.

“You try to make good decisions in life, and I felt coming to Clemson and working for Coach Bowden was a great one,” said Koenning. “LSU calling tested my integrity and decision making a little bit, but I know I made the right decision. As much as I hated leaving very good friends at Troy, including a great head coach, Clemson is a great place to coach and a great place to raise a family. I could not be happier with the decision my family and I have made.”

When Koenning speaks of family, it is easy to see what little spare time brings. With wife Tracey and three sons – Brady (9), Camden (5), and Jackson (4) (the couple also has a 25-year old daughter Kimberly) – there is not a great deal of down time.

“I have three awesome boys at home and a wife who has an awesome heart,” said Koenning. “The Lord has blessed me very much. My job is very important and very time consuming, but I want to make sure I don’t lose sight of their importance at any time.”

There will be little relaxation this afternoon as Tiger Band plays “Tiger Rag” and the team prepares for its trip into Death Valley to face Boston College. If Vic Koenning has made his way there, Tiger fans will know that some of the goals he has set for his first defensive unit at Clemson have been accomplished. If he is not there today, there is little doubt he will make such a trip sometime during the fall of 2005.

Sanford Rogers worked in the Clemson Sports Information Office from 1989-93 and now works in sales in Greenville, SC.