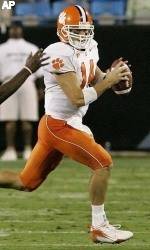 Clemson, SC – Will Proctor, Clemson’s starting quarterback in 2006, has made the roster of the Montreal Alouettes of the Canadian Football League.

Proctor is listed as a reserve quarterback behind veteran Anthony Calvillo on the Alouettes depth chart. Former Cal-State Northridge quarterback Marcus Brady is also a quarterback on the Montreal roster.

Proctor is one of two former Clemson players on CFL rosters for 2007. Former Clemson defensive end Rahim Abdullah is in his sixth year in the league, his first year with the Edmonton Eskimos.

Proctor had a solid preseason to make the Montreal roster. He was 7-8 for 84 yards in the first preseason game against Toronto on June 9. He was 1-1 for 3 yards and had a 21-yard run in the second preseason game on June 21 against the same Toronto team.

Proctor’s selection to the roster means a former Clemson quarterback will be on the Montreal roster for the second straight year. Former Tiger Nealon Greene was the second string quarterback for Montreal last year, his ninth year in the CFL. Greene is a free agent at the moment. He has thrown for 14,518 yards and 78 touchdowns in his nine CFL seasons.

Abdullah led Calgary in sacks last year with nine. In his previous five seasons in the CFL, Abdullah has recorded 31 sacks. He signed as a free agent with Edmonton on June 18.