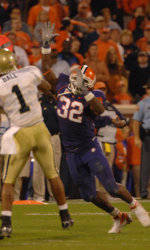 Clemson linebacker Nick Watkins was named ACC Defensive Lineman of the Week by the Atlantic Coast Conference for the week of November 13. Watkins had 14 tackles, including eight first hits, to help the Tigers to a 20-14 victory over NC State Saturday. Watkins also had a late fourth quarter interception that led to a Jad Dean field goal which put Clemson up 20-14 in the game.

Complete release from the ACC:

OFFENSIVE BACK Maryland wide receiver Darrius Heyward-Bey caught five passes for a career-high 165 yards and two touchdowns in Saturday’s 14-13 win over Miami. The Silver Spring, Md., freshman teamed with quarterback Sam Hollenbach on touchdown receptions of 65 and 96 yards in the first half as the Terps built a 14-0 lead. The 96 yard reception ties for the longest pass play of the season nationally and broke a school record set in 1949.

OFFENSIVE LINE In earning the award for the second time this season Boston College guard Josh Beekman turned in an outstanding effort in Saturday’s 28-7 win over Duke. The Amsterdam, N.Y., senior was a key member of an Eagle offensive line that enabled Boston College to amass 31 first downs and 501 total net yards versus the Blue Devils.

DEFENSIVE LINE Clemson linebacker Nick Watkins had 14 tackles, including eight first hits, in Saturday’s 20-14 win over NC State. The New Orleans, La., junior also came up with an interception late in the fourth quarter that led to a Clemson field goal, giving the Tigers a 20-14 lead with three minutes left.

DEFENSIVE BACK Maryland’s Josh Wilson had a game-high five pass breakups in Saturday’s 14-13 win over visiting Miami. The Upper Marlboro, Md., senior also had four tackles against the Hurricanes as the Terps extended their winning streak to five in a row with the win.

SPECIALIST In earning the award for the fourth time this season Wake Forest placekicker Sam Swank made three field goals, including one from 51 yards out, in the Deacons’ 30-0 win at Florida State Saturday. The Jacksonville Beach, Fla., sophomore also punted six times for an average of 40.7 yards per kick, with none of the punts being returned.

ROOKIE Wake Forest quarterback Riley Skinner completed 13 of 19 passes for 138 yards and one touchdown in Saturday’s 30-0 win at Florida State. The Jacksonville, Fla., freshman has completed over 60 percent of his passes in each of the last seven games and currently leads the ACC in passing efficiency with a 145.8 rating.