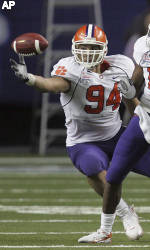 Clemson, SC – Clemson junior defensive end Phillip Merling has decided to enter the National Football League draft. The native of St. Matthews, SC led Clemson in tackles for loss with 17 and quarterback sacks with seven in 2007, helping the Tigers to a top 10 national ranking in scoring defense and total defense.

“We wish Phillip the best in his pursuit of a National Football League career,” said Clemson Head Coach Tommy Bowden. “He has the ability to be successful in his professional career. I advised him to remain for his senior year, but he felt this was the best decision for his future. I will help him any way I can as he prepares for the draft.”

Merling joins Clemson running back James Davis as Clemson juniors who will enter the NFL draft. It marks the fourth time in history that two Clemson juniors have turned professional in the same year. The other seasons were 1990, 1998, and 2003.

Davis and Merling are the 16th and 17th juniors to turn professional from Clemson. Thirteen of the previous 15 have been drafted and 11 of the 15 have gone on to play in an NFL game.