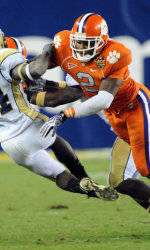 CLEMSON, SC – Clemson safety DeAndre McDaniel has been named a preseason first-team All-American by NationalChamps.net, a website that covers college football. McDaniel was a first-team All-American according to the Football Writers of America last year when he helped the Tigers to a #24 final Associated Press ranking and the school’s first ACC Atlantic Division title.