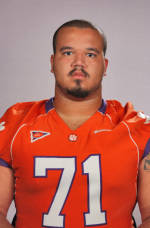 Clemson, SC — Barry Humphries is no longer a member of the Clemson football team, Head Coach Dabo Swinney announced on Friday. Humphries intends to transfer to another school for his final year of eligibility this fall.

“I would like to be a starter in my final year of college and it would be very difficult for that to be the case at Clemson this year,” said Humphries. “With my suspension for the first two games I was not going to get a lot of action in preseason camp, and it was going to be difficult to get in the mix as a starter. So, I plan to transfer to a school where I might have the opportunity to get a starting position.”

Humphries was to serve a two-game suspension to open the season for a violation of team rules had he remained at Clemson. He was listed as a fourth team center and guard entering preseason camp, which starts on Tuesday.

Humphries was a three-year letterman for the Tigers, but he had an injury plagued 2008 season when he suffered a torn ACL. He played the opening game against Alabama and suffered a knee injury. He attempted to return on October 18 against Georgia Tech, but reinjured the knee and it was determined that he needed season ending surgery.

The native of Anderson, SC and Belton Honea Path High School was second on the 2007 team in knockdown blocks with 86.5. He started seven games that year, five at center and two at right guard. He had a team best 9.5 knockdowns in the season opening win that year against Florida State. He was a second-team center in 2006 when Clemson ranked fifth in the nation in rushing. He red-shirted the 2005 season.

Humphries earned his undergraduate degree from Clemson this past May.