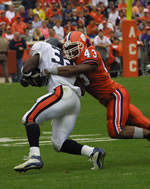 Clemson linebacker Leroy Hill has been named to the 2004 Rotary Lombardi Preliminary Watch list. The award is presented at the conclusion of the college football season to the top lineman in college football. Offensive linemen, defensive linemen, tight ends and inside linebackers are eligible for the award. This is the 35th year of the award, which is presented by the Rotary Club of Houston, TX.

Hill was one of 54 players named to the preseason watch list, one of six players from the Atlantic Coast Conference. The other ACC players were Alex Barron of Florida State, C.J. Brooks of Maryland, Eric Henderson of Georgia Tech, Heath Miller of Virginia, and Eric Winston of Miami (FL).

Hill, who will be a senior in 2004, was a first-team All-ACC selection last year when he ranked second in the nation in tackles for loss with 27. He also ranked fifth in the nation in solo tackles (110) and had 145 tackles overall in 13 games as a starter. He had 43 tackles during Clemson’s four game winning streak to end the season, including double figure tackle games in Clemson’s wins over top 10 Florida State and Tennessee teams. Hill was named the Defensive Player of the Game in the 2004 Chick-Fil-A Peach Bowl when he had 12 tackles, including a pair of sacks.

A Clemson player has never won the Lombardi Award. William Perry was a finalist in 1984.