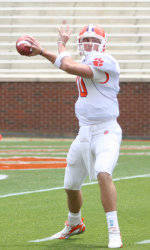 Clemson, SC – Cullen Harper threw three touchdowns passes, two to junior receiver Tyler Grisham, to lead the Orange team to a 35-16 victory over the Purple team in Clemson’s annual Spring Football game at Clemson Memorial Stadium. The game was played before a Spring Game record crowd of 20,000 fans. The game concluded Spring practice for Tommy Bowden’s Tigers, who will open the 2007 season at home against Florida State in a primetime Labor Day evening game on ESPN.

Harper completed 15-24 passes for 147 yards and the three scores. James Davis had 100 yards rushing in just six carries to lead the Orange ground game. His effort on Saturday included a 65-yard touchdown run that put the Orange team in the lead in the second period. Aaron Kelly had the most reception for the Orange team with 6-89, including a 34-yard scoring pass from Harper. Grisham had 3-30 and the two scores.

Willy Korn and Tribble Reese both worked at quarterback for the Purple team. Korn, a first-year freshman who entered Clemson in January, completed 13-25 passes for 135 yards and one touchdown. Brian Linthicum had two catches for 46 yards, including a 36-yard touchdown reception from Korn.

Chris Clemons and DeAndre McDaniel both had big plays to lead the Orange defense. Clemons returned a fumble 23 yards for a touchdown in the second quarter, and McDaniel had a 34-yard interception return. Prior to Clemons fumble return, the Purple had a 13-0 lead, but his play changed the momentum of the game. Byron Maxwell also had a 16-yard interception return. Cortney Vincent was the top tackler for the victorious Orange team with 10 tackles, while Jeremy Campbell had nine.

Ricky Sapp has two tackles for loss, including a sack and two passes broken up, while Kevin Alexander was the top tackler with six. Sadat Chambers had the only turnover for the Purple defense with a 30-yard interception return.

The play of placekicker Mark Buchholz was also a highlight for the purple team. A three -year starter on the Clemson men’s soccer team, Buchholz joined the team for spring practice and delivered three field goals in three attempts. He connected on kicks from 21, 32 and 35 yards and made his only extra point attempt. His 35-yarder gave the Purple a 16-14 lead with 6:28 left in he first half, but that was the last lead for the Purple.

The final three scores were the three touchdown passes by Harper, two to Grisham and one to Kelly. The first half of the game was played with normal clock rules, but the second half was played in running time with the exception of changes of possession.

Clemson head coach Tommy Bowden’s was pleased with his team’s performance. “This closed a productive spring,” said Bowden, who will be in his ninth season when Clemson opens play in September against his father’s Florida State team. “I thought the five freshmen who entered in January played well today. That is not easy to do. There is a big transition and they have really done a good job.

“McDaniel played very well in the secondary and had an interception, I thought Willy Korn played well at quarterback and Brian Linthicum caught a touchdown pass and Xavier Dye caught a pass early.

“The kicking of Mark Buchholz also stood out. The ball really jumps off his foot. We will put him on a full football scholarship next year.” Buchholz will continue to play soccer as well for Trevor Adair’s nationally ranked program.

Bowden also said that quarterback Cullen Harper will be his number-one quarterback heading into August practice. “He will have to do something to lose it (starting position) between now and then and that would be out of character for Cullen. He is a hard worker who has been consistent all spring. We will meet next week to determine a pecking order at that position.”

In the three spring stadium scrimmages, Harper completed 42-68 passes for 447 yards and four touchdowns with no interceptions.

Bowden was also pleased with the play of his skill position players. “Tyler Grisham were outstanding as well.”