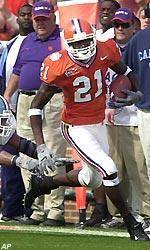 Clemson juniors Derrick Hamilton and Donnell Washington will pass up their final year of eligibility and enter the NFL draft. Both were second-team All-ACC players for the 9-4 and 22nd ranked (both final polls) Tigers this past season. This is the first time since the 2000 season that Clemson has had a player leave early for the NFL.

“We appreciate the contributions both Donnell and Derrick made to our program the last four years and we wish them well in their pursuit of a professional career,” said head coach Tommy Bowden. “Their departure will give some incoming freshmen an opportunity to help our team next year.”

“I want to thank all of my coaches, teammates and the Clemson fans for all their support the last four years,” said Hamilton, who met with Bowden Friday morning. “Clemson is a great place, I will miss it. It has been a rewarding experience to represent Clemson University.”

First-team All-America linebacker Keith Adams was the last to leave after his junior year in 2000. When Adams left, he was drafted by Tennessee in the sixth round, but did not make a club in 2001. He is now in his third year in the NFL, currently with the Philadelphia Eagles.

This will be the first time since 1998 that Clemson has lost two players with eligibility to the NFL draft. That year Rahim Abdullah and Corey Hulsey both left with one season of eligibility remaining. The only other year Clemson lost two players was in 1990 when Dexter Davis and Chris Gardocki turned professional with a year remaining. Gardocki is still playing in the NFL with the Cleveland Browns.

Prior to this year, Clemson had nine players leave for the NFL with eligibility remaining. Eight of the nine eventually made it to the NFL. Ronald Williams was the only one who did not, but he played nine years in the Canadian Football League.

Hamilton concluded the season with 62 receptions for 1026 yards and 10 touchdowns. He finished his career as the school’s all-time leader in receptions, kickoff return yards, and all-purpose running. He had 167 catches, breaking Rod Gardner’s record by one. He joined Gardner as the only players in Clemson history to gain over 1000 yards receiving on one season. His 10 reception touchdowns established a Clemson single season record. He averaged 34.5 yards per kickoff return this year, including a 100-yard return against North Carolina.

Washington led Clemson’s defensive front in tackles with 56 during the 2003 season. He had 10 tackles for loss, including four sacks and led the team in quarterback pressures with 25. He had a season high nine tackles at Wake Forest and had eight in the win over Duke. Washington started all 13 games each of the last two seasons.