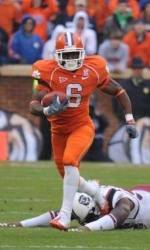 Ford, a consensus preseason All-ACC choice for 2009, is the only ACC player among the 37 players named to the Biletnikoff Watch list. He had 55 receptions for 710 yards and four touchdowns last year when he was second on the Tigers team in all three categories to Aaron Kelly. He finished the year strong when he had five catches for 112 yards and a touchdown in the Konica Minolta Gator Bowl against Nebraska.

Ford is also an All-American in track at Clemson. He won the NCAA Championship in the 60 meters indoors in March of 2009.

No Clemson receiver has won the Biletnikoff Award. Tony Horne (1997) and Rod Gardner (2000) were named semifinalists.