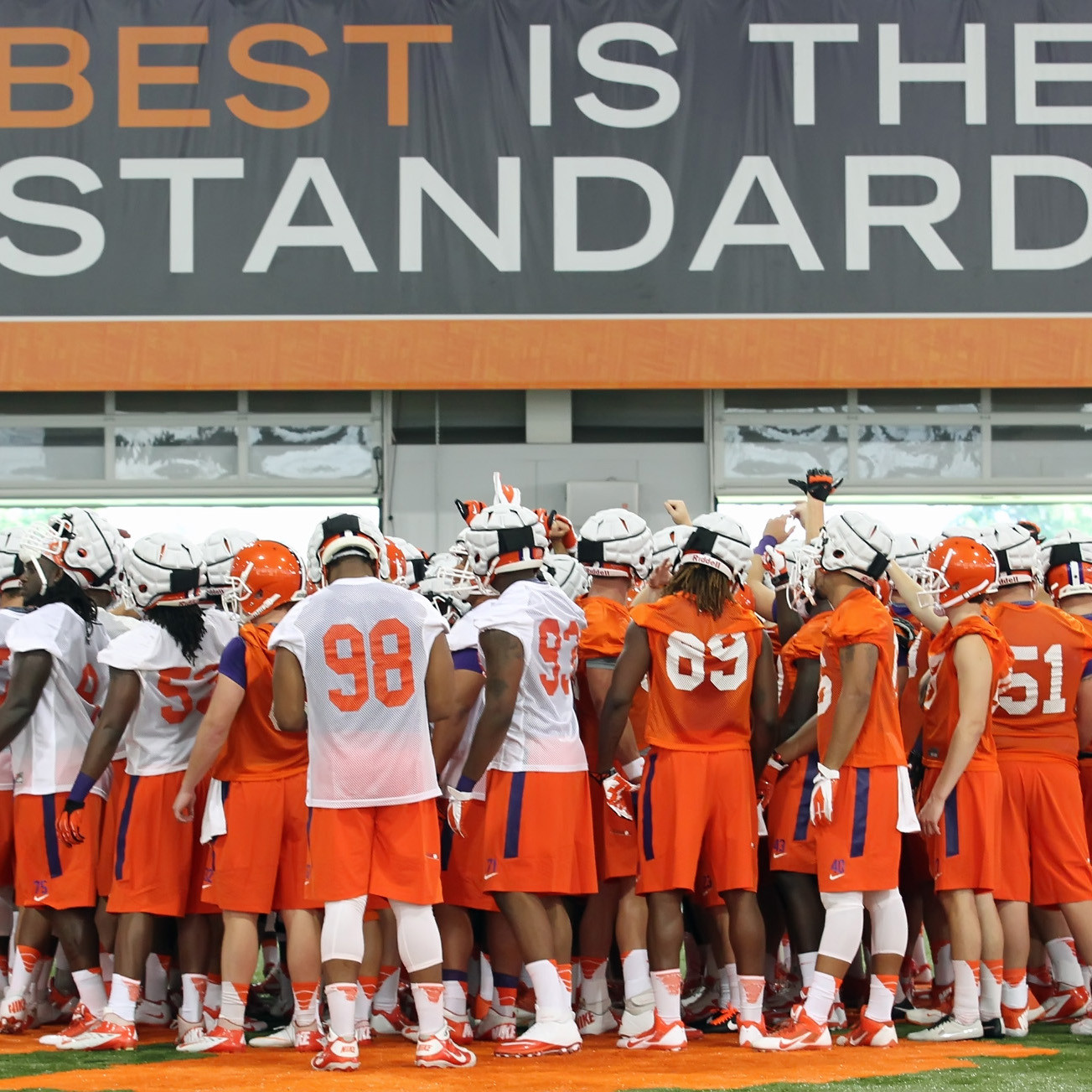 CLEMSON, S.C.—The Clemson football team had its second day of practice on Saturday evening as it prepares for the 2014 season. Head coach Dabo Swinney said he was pleased with the team through two workouts in shorts and helmets, but the weather has had an effect on the practices in a positive and a negative way.

“It has been Cupcake Camp so far,” Swinney said after his team worked for two and a half hours early Saturday evening. “This is my 25th season of college football and I have never been around weather this cool for the first two days. It has been good in that it has added to the energy and the attention to detail by the players.

“At the same time, we need some hot days from a conditioning standpoint. We know they are coming. When we put the pads on in the heat it will separate some of the positions.”

Right now, Swinney says there are quite a few positions where you can flip a coin when it comes to playing time.

“We have a deep football team and there are a lot of guys who deserve to play. This is the most depth and experience since I have been here. I am anxious to have the team get the pads on (full pads first time on Wednesday) and that will tell us a lot.”

Swinney talked about his quarterbacks after practice, in particular their physical conditioning.

“Cole has fueled his body the right way. He has bought into getting the proper nutrition. So has Deshaun Watson. He came here in January at 184 pounds. He has done what he has needed to do and is now 204. He will leave here at 220. With both players, they have put on the right kind of weight.

“I am proud of almost all the guys. Spencer Region weighs 333 pounds, and that is the lightest he has been since he came to Clemson. I am proud of him. He has had his best summer.

“We didn’t think about nutrition years ago, but now you need it to give you an edge. It took a while, but the team has bought into it. It is now cool to be nutritionally competent.”

There was one new injury to report. Freshman wide receiver Artavis Scott missed the practice with a bruised knee.

The Tigers will take Sunday off, then return to practice Monday through Saturday next week. The week will be completed with a scrimmage on Saturday.

• Clemson assistant head coach and tight ends coach Danny Pearman missed his second consecutive practice after the death of his father last week. He will return to Clemson on Sunday.

• Among the former Clemson players at practice were quarterbacks Rodney Williams and Homer Jordan. Williams will return to the Clemson radio network as color commentator this year, a position he last held in 2002. Jordan quarterbacked Clemson to the national championship in 1981.

• The Tigers used a drone during the second half of practice during some drills. The device films the plays from just above the players from behind the offense and gives the coaches a different perspective when watching practice. The drone is operated by defensive player development coach Rhett Brooks, the son of defensive line coach Dan Brooks.

[View the story “Football Practice No. 2” on Storify]