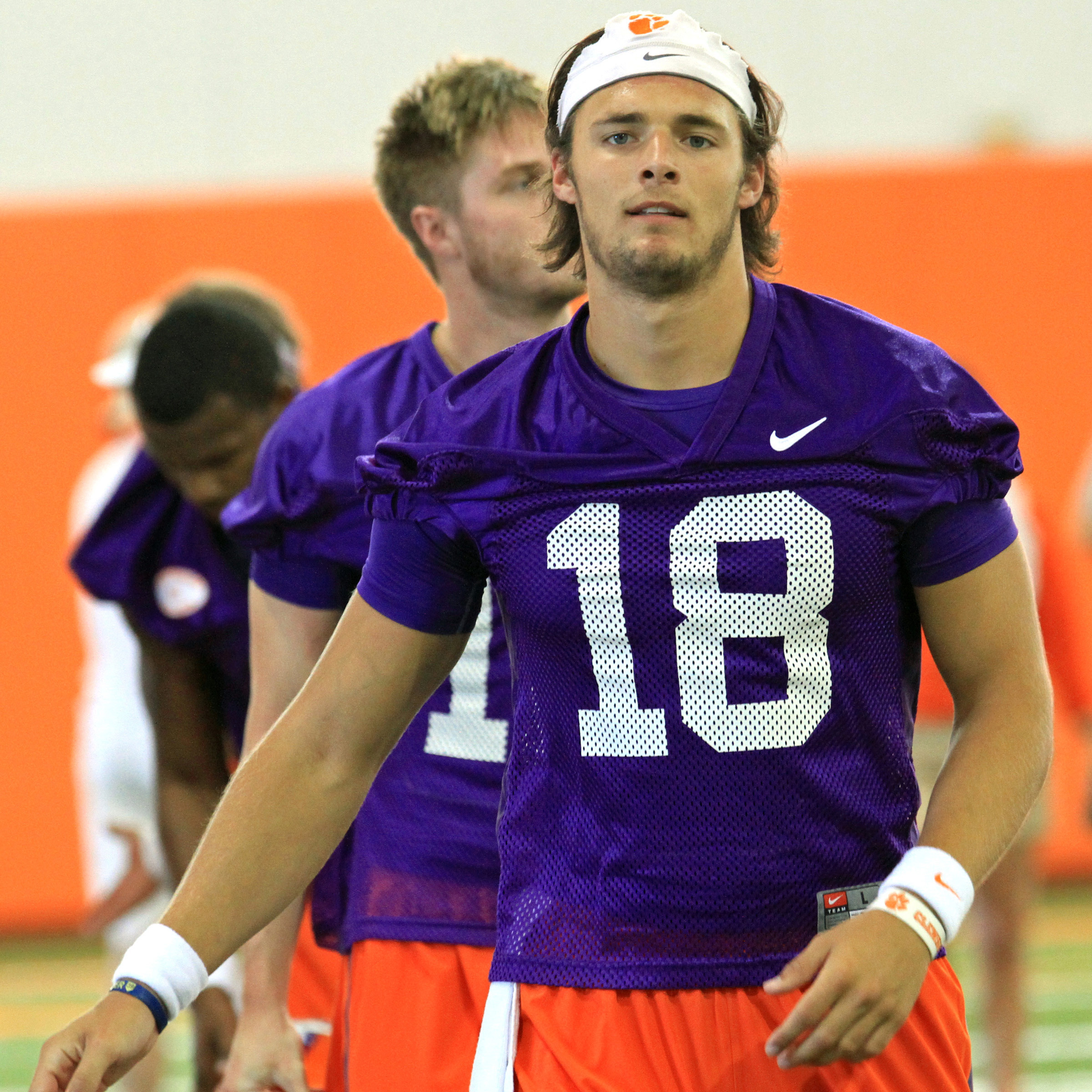 CLEMSON, S.C. — The Tiger football team had a change of venue for practice on Monday morning. It was not a long trip, but it was a change. The Tigers practiced in Jervey Meadows, the area beyond Doug Kingsmore Stadium. There was a two-fold reason. “We are going to have to be road warriors in September,” said Dabo Swinney, whose team plays at Georgia and at Florida State within the first three games of the season. “We were getting a little too comfortable on our nice practice field and perfect indoor facility. So I thought I would throw them a curve ball. I didn’t even tell the coaches until Sunday. We need to be able to play on the road this year and be ready to go.” Swinney also said keeping his normal practice fields in pristine condition was another reason for the move.

“Our practice fields are in terrific condition and we want them to stay that way,” he said. “This is the period of time we put the most stress on our fields all year. I want them to be in good shape for game week for Georgia.” Swinney talked about the importance of having the right mindset when going on the road.

“I loved going on the road when I was a player. It adds to the intensity when everyone is not pulling for you. Team experience has to come into play to overcome that and we have a lot of experience on this team.”

Clemson has 21 scholarship seniors, the most since Swinney became head coach in 2009. It was another up-tempo 20-period practice for Swinney’s Tigers, the first of two practices on Monday. Clemson will also work 16 periods this evening in shells.  The practice included the  rapid fire drill, in which plays are run at a breakneck speed with the first-team offense and second-team offense alternating every play. Cole Stoudt took all the reps with the first-team offense on Monday. Swinney talked about what he saw based on his film study of Saturday’s scrimmage.

“I saw a lot of good competition first of all. It is tough to keep it in perspective because one team’s success is another team’s failure. The defense showed its depth. We have a lot of players who will contribute. I can’t think of a single player that disappointed us as a staff on defense. The defense overall did a good job of not allowing big plays. “The offense was solid. The receivers did not have a drop and there were no turnovers. We had very few missed assignments. We have seen some offensive linemen step up with Isaiah Battle out for a short period of time. Joe Gore continues to be a bright spot and Tyrone Crowder is much improved since the spring.” Swinney was also impressed with what he saw on special teams.

“We tackled live on kickoff returns and punts. Bradley Pinion had a couple of 60-yard punts when he was backed up in his own endzone. Ammon Lakip was 5-of-6 on field goals (including pre-scrimmage attempts).” The Tigers continue to improve from a health standpoint. Battle was in a green jersey and went through some drills, as did Travis Blanks. Swinney also said that wideout Charone Peake continues to improve and hopes to be at practice full go in a week. The only new injury was an ankle injury suffered by receiver Daniel Rodriguez. It is not believed to be serious.