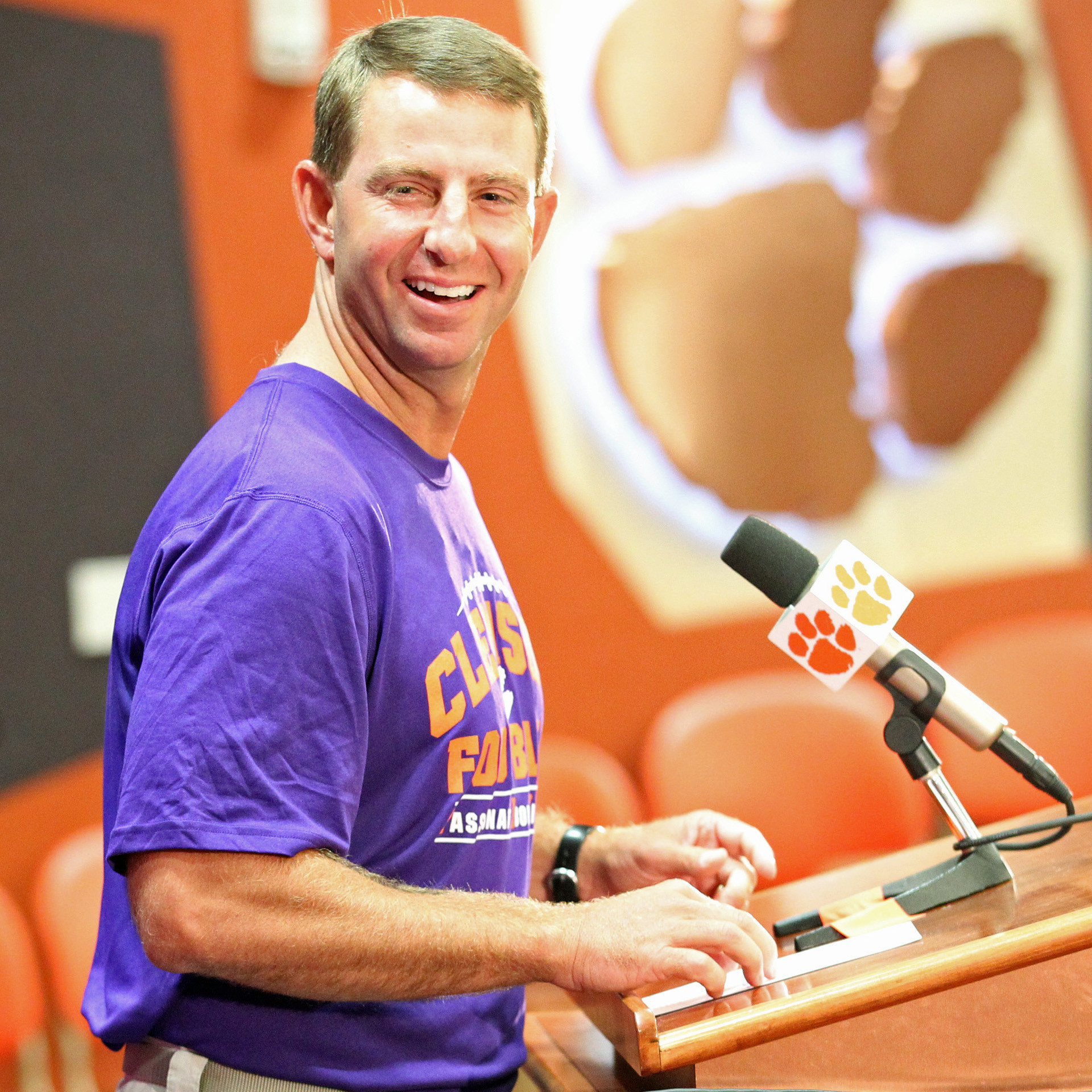 CLEMSON, S.C. – The Tigers opened fall practice on Friday and the August 1 date tied for the earliest first day of practice in the school’s football history. (Clemson also started on August 1 in 2008).

The temperature was unseasonably cool, among the best opening days weather wise anyone could remember. It led to a spirited first practice for Dabo Swinney’s Tigers, who open the season August 30 at Georgia.

“I don’t know what’s going on with the weather,” Swinney said. “Today’s temperatures made for a good practice. It was great to be back.”

The weather was so cool and windy after practice, Swinney considered not having the team hop in the cold tub at the end of practice.  But, in the end, the team did before exiting the field.

The Tigers worked for nearly two and a half hours on the practice fields behind the indoor facility.”

“This was a big day for our family,” Swinney said. “Two of my boys (Will and Drew) began practice today at Daniel High School, then we started practice in the evening.”   Clemson worked in shorts and helmets for the duration of the practice per NCAA rules. The Tigers will practice for two-and-a half-hours on Saturday evening, then take Sunday off before starting a stretch of six consecutive days of practice on Monday. The first scrimmage will be a week from Saturday.   The only player who was held out of the first practice was wide receiver Charone Peake, who had minor knee surgery a week ago. He is expected to miss the first week of practice.     Running back Tyshon Dye went through some drills, but was held out of others as he recovers from an Achilles tendon injury suffered last spring. He redshirted the 2013 season. Former Clemson All-American Leroy Hill is back at Clemson as a student coach and suffered the same injury while playing in Seattle in the NFL. He has been a good sounding board for Dye.

Linebacker Kellen Jones, who is coming back from a torn ACL, was in a green jersey as well and was held out of some drills.   It was a big day for the Clemson program in more ways than just a first practice. Clemson signed 13 future Tigers to financial aid agreements. All 13 plan on entering Clemson as student-athletes in January, and it will be the largest group of midyear football players in the history of the program.   “Today really showed how times have changed,” said Swinney, who became Clemson’s interim head coach in October 2008 and then earned the full-time title in December. “In February of 2009 we had just 12 in our first recruiting class. Today we signed 13 in the month of August. We will add some more in February, but today was a great day.   “We had a specific need on the offensive line, and we signed four outstanding players. It was critical.”

All four are ranked among the top 31 in the nation at their respective offensive line positions according to many services.

“We are very proud of this class academically,” he said. “They are a group that knows what they want to do. They have planned ahead so they can graduate in December and they are strong students so that they can do it. We look forward to having them in January.”