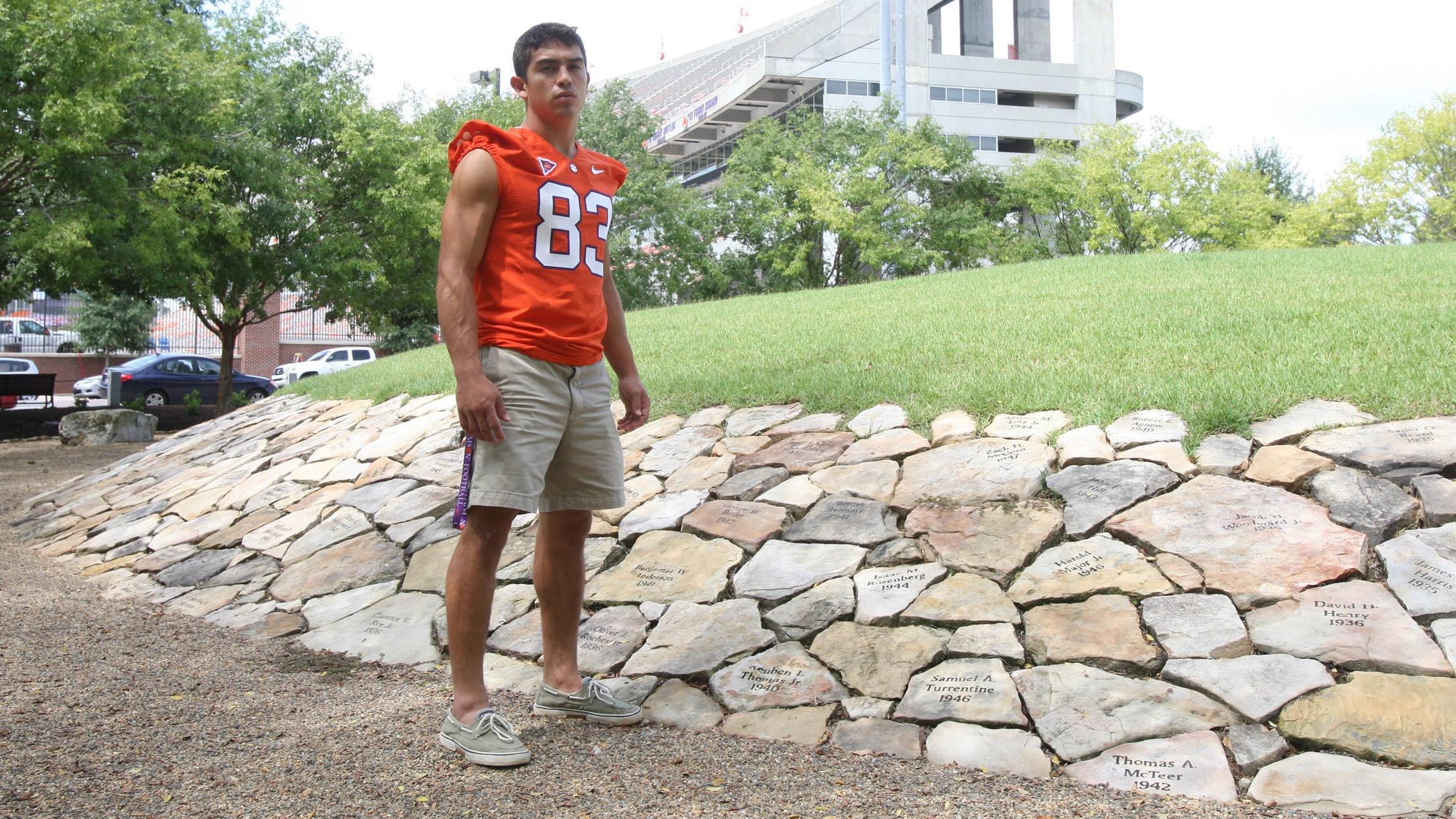 When Daniel Rodriguez came running onto the Georgia Dome field with his teammates for the first time to start the 2012 season, he heard the roar of the crowd and the sweet sound of “Tiger Rag.” It was quite the emotional moment for the Stafford, VA native.

A week later in Clemson’s home-opener against Ball State, Rodriguez again experienced emotions he never imagined possible three years ago as he touched Howard’s Rock for the first time and charged down the Hill with 78,000 screaming fans in Memorial Stadium. He also caught a pass in his first action from scrimmage.

“It was a pretty emotional moment,” said the walk-on wide receiver.

Among those cheering in the stands were veterans from several wars…World War II, Korea, and Vietnam. They are combat veterans, men and women who have seen things the rest of us could not imagine.

But on this day when the Tigers took the field in a stadium that is named in honor of some of their fallen soldiers, they stood prouder than they have in many, many years. For on this day, they looked down and saw someone who was like them. Not only was he playing a game on the same field that they once played, but like them, he is a veteran of war, a veteran of combat. He is a solider. And now like them, he is a Clemson Tiger.

“It’s one of those moments I’m going to cherish,” said Rodriguez. “Not only am I sharing this with my teammates, I’m sharing it with my other teammates, the team that I served prior to this.

“It’s an honor to have been on their team, because I’m literally filling the cleats that they have filled. We filled the boots together. We all put on those boots on foreign soil for this country’s need. They came back from War World II, the Korean War, or Vietnam and played football.”

Coming out of high school six years ago, Rodriguez was not sure what he wanted to do, much less play college football. He played high school football and was proficient, but he never seriously thought about playing at the collegiate level even though he loved the sport. He was living life in the moment, having a good time and hanging out with friends like young people do.

The celebration of finishing high school was still going on when Rodriguez suffered the first real setback of his young life. His father, Ray, suddenly passed away four days after graduation. Rodriguez was in shock. He did not know where to turn or what to do.

“I left two or three weeks later,” recalled Rodriguez. “I enlisted in the military after he died. I didn’t know what was going on, so I went to the recruiter and said, ‘Get me out of here’.”Military life was not a planned career for Rodriguez. It was one of those things where a change of events occurred.

“I was thinking, ‘What do I do next?’ I did not want to have that label or that thought that I blamed my father’s death on what I became as an individual. I didn’t want to be like, ‘Oh, my dad died…that’s why I’m doing a dead-end job and didn’t become anything.’

“That was not going to be me. I had to get out of my environment and that surrounding and be thrown into the mix.”

What he was thrown into was the mix of infantry and war. But he did not have time to think about that. Though he was upset that his father died, his new life in the military took over.”It developed me as a man,” he said. “And that’s what I needed. That was the kick-in-the-butt factor. It got me out of what was happening. It showed me what I wasn’t doing in high school, as far as getting good grades and those things.

“It was now time to grow up. That time of your life needs to be abolished, immediately. But remember it…remember what you were and remember where you came from, but go pursue greater things. That’s what I used the military for.”

Four days later, Rodriguez was on his way to boot camp to train in the infantry division at Fort Benning, GA.

“I try not to think about what I might have become had I not joined the military. I would probably be mediocre or average. I don’t think I would have done anything significant. I don’t know if what I’m doing now is significant, but it is to me.

“If I had stayed in my hometown and made excuses, I may have gotten a degree and I may have done something. There are a lot of possibilities on what I might have been, but I don’t like to think about it, because this is where I am now.”

It is amazing that Rodriguez is even in Clemson, or alive at all. This time three years ago, he was in the hospital recovering from a gunshot wound suffered in the battle of Kamdesh in Eastern Afghanistan. On October 3, 2009, more than 300 Taliban forces assaulted Rodriguez and the American Combat Outpost Keating, near the town of Kamdesh.

The attack was one of the bloodiest battles for U.S. forces in Afghanistan, resulting in the death of eight American soldiers and 22 wounded. It was also one of the driving forces as to why Rodriguez is now running down the Hill as a Tiger.

“His story is amazing,” said Head Coach Dabo Swinney. “Here is a young man (24 years old) who has been through so much. He has seen things and lived through things none of us can even imagine.”

Keeping a promise he made to himself and his friend, Kevin Thompson, one of the eight soldiers who gave his life in the battle of Kamdesh, Rodriguez is playing college football.”I made a promise to him that I was going to play college football when I got out of the military,” said Rodriguez, who earned a Purple Heart and the Bronze Star Medal With Valor (pictured below) for his heroism at Kamdesh. “I did not want my life to amount to just military. I went in with the idea that it was going to be a stepping stone.

“What I did not do out of high school was follow my heart and play football. I made that pact with my friend that I was going to play when I got out, and then he was killed during that battle.”

Once Rodriguez was discharged from the Army, he quickly started fulfilling his promise. He attended college classes near his hometown and got his grades up. He also started playing football again, working out several hours a day to regain his playing shape.

“I got back in the swing of things and started training about six hours a day.”

With the encouragement of friends, Rodriguez produced a workout video that he sent to college coaches around the country in hopes of getting a tryout. With the request of college recruiters to put the workout video on YouTube.com, Rodriguez went viral, and so did his life story.

His video got the attention of many schools, including Virginia and Virginia Tech in his home state. But it also caught Swinney’s eye, who sent Rodriguez this message.”I saw your video and would love to talk with you about an opportunity to come to Clemson.”

Virginia told Rodriguez that his high school grades were not good enough, though his college GPA was high. Virginia Tech, the school he always wanted to play for, told him he needed an associate’s degree in order to attend, and that he could come back and talk to them once that was completed.

Clemson used a waiver called the 24-transfer waiver, which waives the associate’s degree and allows an athlete who is not a qualifier out of high school to come in and play. Rodriguez was only one credit shy, so Clemson put in a request to the NCAA.

When learning Clemson was able to go the extra mile to get him into school, Rodriguez agreed to take a visit to Tigertown during his spring break earlier this year.

“I wanted to see what Clemson was all about,” he said. “When I came down, that sealed the deal. I didn’t care how long it took me to come here. I knew I was going to play here.”Clemson going to bat for me was the ultimate factor, because Coach Swinney wanted to take that risk. He wanted to take that leap.”

That leap of faith was rewarded in August when the NCAA and the ACC officially approved Rodriguez’s waiver, allowing him to become a full-time student-athlete on the football squad.

“You always dream of that second chance to play football again,” continued #83. “I’m in that position. I have that second opportunity that so many people have said, ‘I wish I could get one more shot.’

“Well, now it is my shot. I have that opportunity. That helmet is on my head. I have a school that I’m proud to be a part of, and now I’m going to let it all loose.”

Rodriguez has done just that. Despite a shoulder injury in fall camp, he bounced back in the last two weeks before camp ended and earned a roster spot. He became a starter on special teams when Clemson took the field against #25 Auburn in the season-opener.

“He has overcome a lot of things,” said Swinney. “He has been through a lot of adversity and it has made him a better young man. It’s made him the man he is today. His desire, his determination, and his willingness to work for what he wants is something you love to see in young people.

“His attitude is only going to help our football team going forward. And by the way, he is a pretty good football player, too.”

As Rodriguez stood atop the Hill prior to the Ball State game, his thoughts went back to the many conversations he and his good friend, Thompson, had.

“He was one of my fellow soldiers and we lived together,” said Rodriguez. “We shared a bunk for eight months. We saw each other day-in and day-out, plus the year we trained back home.

“When you are in that environment and you have that brotherhood of soldiers and you go out and hang out, he is one of your boys. When he was killed, it hurt. That’s why I do it. I’m doing it for my fallen brother and the promise I made to him. As long as I’m breathing, I’m still going to keep pursuing it until my time expires.”

This afternoon, Clemson will continue one of its grandest traditions as it honors its heritage with Military Appreciation Day. It will be a special day for Rodriguez for many reasons. First, it will be his late father’s birthday. Second, Clemson will be playing his favorite team from his youth, Virginia Tech. Finally, he will lead the Tigers down the Hill while carrying the American flag.

He will think of those war veterans who will be sitting in the stands saluting him as he leads his new teammates onto the field in Memorial Stadium.

“It’s a great honor to represent veterans on the football field on Military Appreciation Day,” said Rodriguez. “I think it’s the greatest privilege I’m going to have as far as I’m concerned. It will be an honor. That solidifies us as veterans. That’s why we do what we do. Our pride is holding up those colors…the red, white, and blue.

“People in the stands who can relate to me as a combat vet…it makes me proud. That is going to be one of those moments that I’m going to cherish forever.”