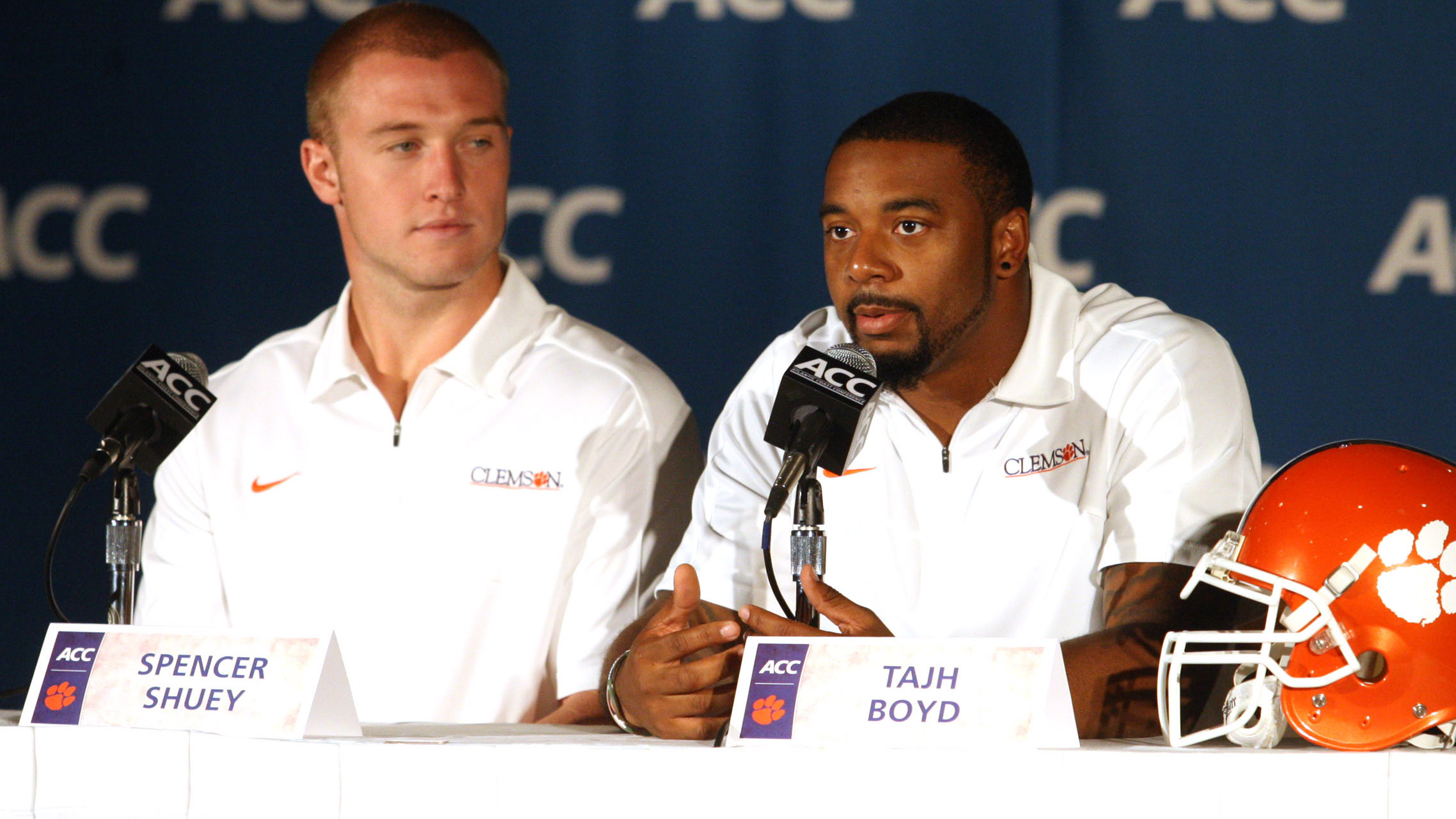 GREENSBORO, NC – If preseason hype had a direct correlation with victories, the throng of media that engulfed Tajh Boyd at the Grandover Resort on Sunday during the ACC Football Kickoff would mean Clemson is set for quite the season this fall.

But even with the buzz surrounding the league’s reigning Player of the Year and his Tigers, Boyd knows the team can hardly afford to rest on the laurels of its first 11-win season since 1981 if it hopes to surpass that total this time around.

“You’ve got to perform from year to year, regardless of the situation,” he said. “When you have a good year, that doesn’t give you an excuse to go out there the next year and have a bad year. It just doesn’t work that way, and the biggest thing is going out there and being consistent.”

And Boyd noted that holds just as true for him as it does his team. The quarterback announced in January he would return for his senior season after becoming the first first-team All-American at his position in school history and throwing for 3,896 yards and 36 touchdowns.

“The past two years, I think I’ve been a pretty consistent player statistically, but it’s not really about stats,” Boyd said. “Stats and numbers don’t really mean too much these days. It’s about how you perform and how you lead your program.”

If Boyd is the leader of the Tiger offense, senior linebacker Spencer Shuey is one of the players who fits that bill on the defensive side of the ball.

Shuey was Clemson’s other representative at the ACC’s annual preseason media event and said the defense expects to be much improved this fall after it finished third in the ACC in scoring defense, second in conference games, last season.

“We definitely have the capability and potential, and we have all the guys in all the positions that we need to be a great defense,” Shuey said. “A lot of guys are starting to understand their roles and hold people more accountable, and I think that’s one of the reasons we have the potential to be one of the best defenses here in a while.”

Shuey is the Tigers’ top returning tackler despite recording just 17 stops in the first five games of last season. But after taking over as the starter at middle linebacker, he finished the season with 93 tackles, just two short of the total of leading tackler Tig Willard, who played 181 more snaps over the course of the season.

“I just tried to show myself every day in practice and tried to prove myself and prepare like I was going to play every snap of every game,” Shuey said. “I always tried to be prepared and just waited for my opportunity.”

Shuey was one of the keys to the Tigers’ defensive improvement in 2012 under first-year coordinator Brent Venables – improvement that culminated in limiting No. 7 LSU to just 219 yards of total offense and nine first downs in the Chick-fil-A Bowl.

The defense officially returns just six starters, but there are 10 players returning on defense who started at least five games last year.

With that kind of experience coming back, particularly in the front seven, Shuey said the defense believes it can be significantly better in its second season in Venables’ scheme.

“I think it’s a lot of it, especially in the offseason when guys understand the defense better,” he said. “You’re able to help coach each other and make those corrections. You don’t always have to have the coaches there to help you out, and so we’ve been able to take a lot of great strides during the summer because we’re in the second year in the system and we understand it a lot better.”

The Tigers are well aware that there is little margin for error to begin the season, as they open their campaign August 31 by renewing their rivalry against Georgia in an 8 p.m. game at Memorial Stadium that will pit two teams expected to vie for top-10 status.

But Boyd was quick to point out that head coach Dabo Swinney constantly stresses the need for consistency to his players. And even as much as is on the line for the opener, Boyd said the Tigers couldn’t afford to view that as a make-or-break game for their season.

“I think we can accomplish every goal that we have on the table this season,” Boyd said. “We’re going to take it one game at a time and one play at a time, and just continue to work. I think we have everything we need in the program. Potential is one thing, but if you don’t put it to good use, that’s all it is – potential.”