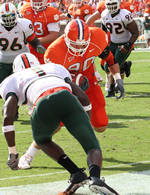 Clemson tight end Cole Downer had surgery Saturday night to have his spleen removed after suffering an injury while making a reception in the fourth quarter of Clemson’s triple overtime loss to Miami (FL) at Death Valley. He will likely miss the remainder of the season.

Downer made a six-yard reception early in the fourth period, but was injured on the play and was helped to the sideline. He was taken to Oconee Hospital in Seneca, SC, where he underwent surgery to remove his spleen. The surgery was successful and he will remain in the hospital for a few days.

The senior from Chantilly, VA had scored his first career touchdown for the Tigers in the first half of the game on an eight-yard reception from Charlie Whitehurst. He had two receptions for 14 yards in the contest and 5-38 for the season. He lettered in 2004 as a reserve tight end and offensive tackle. He first attended Clemson in 2003 as a transfer from Hampden-Sydney College in Virginia.

“We are really going to miss Cole Downer,” said Head Coach Tommy Bowden. “He has good hands, is an outstanding blocker and really fits what we are doing with this offense. He has been working very hard. This is a blow to our team.”

Clemson coaches voted Downer as the Offensive Player of the Week for the Miami (FL) game.