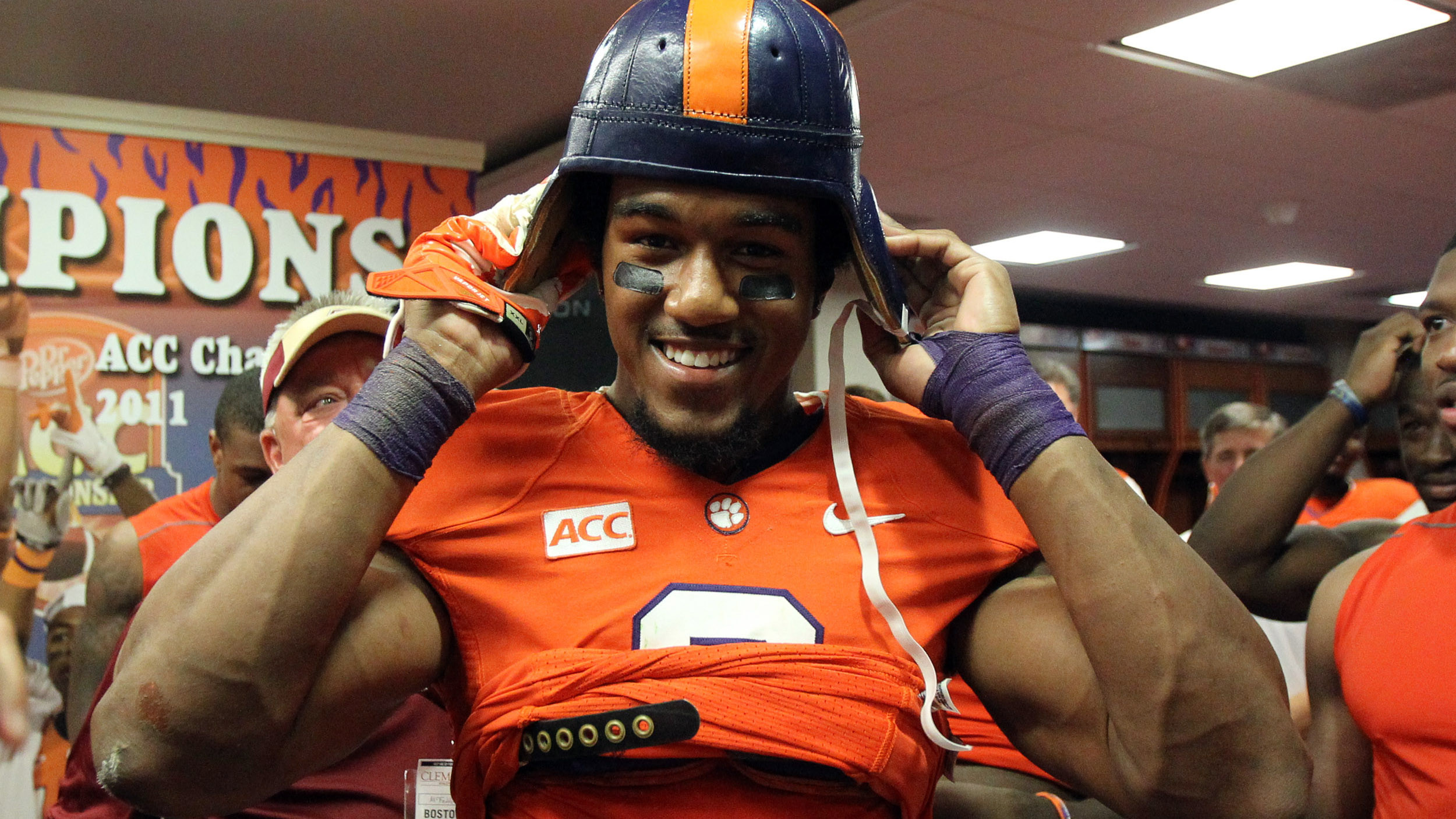 Defense Comes Up Strong in Win over Boston College

CLEMSON, SC – The defense kept Clemson in the game for the first half Saturday against Boston College. In the second half, it went out and won it.

The Tigers had five sacks, limited the nation’s leading rusher, Andre Williams, to 70 yards and scored the game-clinching touchdown on defense, as they overcame a sputtering first half offensively to beat the Eagles 24-14 at Memorial Stadium.

“We knew we had to win the game on the defensive side, and we just locked down and just took over,” defensive tackle Grady Jarrett said.

Tony Steward‘s sack and strip of Chase Rettig in the fourth quarter was recovered by Vic Beasley and returned 13 yards for a touchdown that turned a too-close-for-comfort lead into a double-digit edge for the Tigers and provided the final margin.

The sack was the first of Steward’s career, which has been hampered by a season-ending knee injury he suffered in 2011.

“Anytime you can score on defense – tight game or not – it’s always huge and it’s difficult to do,” defensive coordinator Brent Venables said. “It came at a critical time in the game, and it created a lot of momentum for us. Nobody deserves it more than Tony with the things he’s been through. He really seized his opportunity, and I’m happy for him. I’m happy for us.”

Beasley, who led the nation with eight sacks coming in, was named the game’s MVP after recording five tackles, two for loss, a sack and the game-clinching touchdown. He became the first defensive player to win the Leather Helmet Award.

“He’s tough to handle on that edge when he knows it’s pass time,” Venables said of Beasley. “He’s playing good right now. All those guys up front are.”

The Tigers led the nation in sacks per game entering the game at 3.8. The defense recorded five sacks against BC to give them 24 sacks for the season, an average of 4.0 per game.

The defense has now held five straight foes to 14 points or fewer, the first time that a Clemson defense has done that since a six-game streak from the end of the 1989 season to the first game of the 1990 campaign.

“I think they’re pretty special,” Venables said. “They’ve got a chemistry about them. They like to play. There’s great trust. We’re playing with discipline. We play with incredible effort and passion. And I didn’t name one thing about how many stars they had or all the height and weight and speed or how fast they all are. It’s all those other things that give you an opportunity.”

The third-ranked Tigers (6-0, 4-0 ACC) remained unbeaten with the victory, but it certainly didn’t come without drama, as they trailed both going into halftime and going to the fourth quarter for the first time since the Chick-fil-A Bowl last season.

The offense sputtered in the early going, turning the ball over four times in the first half – twice on fumbles and twice on downs – and even the normally automatic Chandler Catanzaro missed a chip-shot field goal.

But after allowing a 38-yard touchdown run early in the second quarter, the defense kept Clemson in the game. Over the Eagles’ final four possessions of the first half, the Tigers forced two three-and-outs and one turnover, only allowed BC to run 14 plays and held it to 28 yards of offense.

The Clemson defense continued to force quick punts early in the second half, getting a stop after four plays on the opening drive of the half and forcing a three-and-out on the Eagles’ next drive with Stephone Anthony providing an exclamation point with a third-down sack.

Clemson appeared to have finally found the end zone on a 48-yard deep ball from Tajh Boyd to Martavis Bryant, but the play was called back for a penalty.

The Tigers needed just two plays to hit paydirt again, however, as Boyd went deep down the same sideline, this time to Sammy Watkins, for a 48-yard touchdown that gave Clemson its first lead of the day at 10-7 with 6:59 left in the third quarter.

“It was the exact same play (as the one to Bryant),” Watkins said. “We just came back in a different formation and ran the same play.”

But BC answered in short order, as it went over the top for a 69-yard touchdown to Alex Amidon on the next play from scrimmage to regain the lead, 14-10, only 19 seconds after the Tigers had moved in front.

Clemson still trailed going into the fourth quarter, but the deficit didn’t last long. The third quarter ended with the Tigers marching on the BC 32, and three plays later, Boyd burst up the gut for a six-yard touchdown run to give Clemson a 17-14 lead.

After being responsible for keeping Clemson afloat for three quarters, the defense made the play that fully turned the game in its favor on the next possession.

With BC facing third-and-8 at its own 27, Steward tracked down Rettig outside the pocket and stripped him of the football. Beasley scooped up the loose ball and carried it 13 yards for a touchdown to give Clemson a 24-14 lead with 12:42 to go.

“I wasn’t even in the game, and I was sprinting out there to celebrate with my teammates,” Jarrett said. “I was so glad Tony got that sack. He really deserved it. Vic picked it up, and it was just a great play. We needed that so bad.”

The victory sets up an Atlantic Division showdown next Saturday night between the Tigers and sixth-ranked Florida State in what is shaping up to be the first ACC game between top-10 teams that has ever been played at Death Valley.

“It’s good to know that we can win a street fight,” Tiger head coach Dabo Swinney said. “You have to give Boston College credit. They were a tough team, but we battled, we played very physically and we were just a little bit deeper than they were. It’s good to pull out a win. The play of our defense was tremendous.”