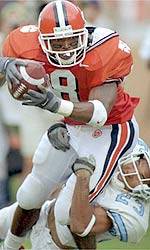 CLEMSON, S.C. (AP) – Woodrow Dantzler completed 16 of 17 passes for 192 yards and three touchdowns Saturday night, leading No. 17 Clemson to a 38-0 victory over The Citadel.

Clemson’s first-string offense dominated the Bulldogs in the season opener, scoring on five of six possessions when Dantzler was at quarterback. But the Tigers sputtered with Willie Simmons and Matt Schell at the helm, failing to score.

The win was Clemson’s first shutout since Oct. 10, 1998, when the Tigers beat Maryland 23-0. Citadel, a Division I-AA team, crossed midfield only once, on a fourth-quarter punt return. The Bulldogs attempted a 36-yard field goal with two minutes left, but Brice Stefanick’s kick went wide right.

Citadel’s most impressive performance came from linebackers Denny Haywood, who had 14 tackles, and Travis Stephens, who had a career-high 13 tackles.

The Tigers scored on their first four possessions, and Dantzler connected on his first nine passes for 114 yards. After overthrowing Rod Gardner on a long third down late in the second quarter, Dantzler threw completions on his last seven attempts.

Travis Zachery set up Clemson’s first scoring drive with a 52-yard carry – the longest of his career – on the Tigers’ first play from scrimmage. Clemson scored three plays later, going up 7-0 on an 8-yard run by Bernard Rambert.

The Tigers scored again, going up 14-0, when a wide open Zachery caught a 26-yard touchdown pass from Dantzler with 6:13 to go in the first quarter.

Clemson linebacker Chad Carson forced Citadel’s Maurice Murphy to fumble on the next possession, with the Tigers’ Gary Childress recovering on the Citadel 31-yard line. Five plays later, Dantzler found Jackie Robinson for a 14-yard touchdown pass, putting the Tigers up 21-0 with 3:06 left in the quarter.

A 16-play, 87-yard drive – Clemson’s longest scoring drive – ended with Aaron Hunt kicking a 22-yard field goal to put the Tigers up 24-0. Dantzler began the drive by narrowly escaping a safety, running for 9 yards after slipping two tackles in the end zone.

Safety Charles Hafley set up Clemson’s only second-quarter score when he intercepted Joe Call’s pass with 3:28 left in the half. Five plays later, Morgan Woodward barreled over tacklers on a 36-yard touchdown reception from Dantzler, putting the Tigers up 31-0 going into halftime.

The Tigers got one more chance when a high snap forced Citadel punter Travis Zobel to run the ball. Clemson got the ball on Citadel’s 27, but a penalty for illegal use of hands pushed the Tigers out of field-goal range, and the Tigers lost the ball on downs.

Clemson opened the second half with a 12-play, 65-yard drive that ended with Zachery’s 2-yard run, putting the Tigers up 38-0 with 10:34 left in the third quarter.

The Tigers have won 14 straight against The Citadel, which last won in 1931. It was the first meeting between the two teams since 1986.

The win was Clemson’s 35th straight against a Southern Conference opponent, dating to Oct. 23, 1952, when South Carolina – now a Southeastern Conference member – beat the Tigers 6-0.