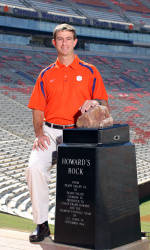 Clemson defeated Boston College, 27-21, on November 1, under Swinney’s direction. It was Clemson’s first win over Boston College since 1958. Boston College has not lost since that game and will play for the ACC Championship this coming Saturday. The Tigers also defeated Duke, Virginia and South Carolina in November. The victory over rival South Carolina was a 31-14 triumph that took place this past Saturday.

“I have had the opportunity to watch Dabo Swinney closely over the last six years both on and off the field,” said Phillips. “He is one of the bright young coaches in America. He took over a very difficult situation for the last six games and showed me what type of coach and leader he is. I was very impressed by the way the team responded to his leadership. That spoke volumes for his abilities. We are proud to have him represent Clemson as our head football coach.”

Phillips said the length of Swinney’s contract will be five years, but other specifics will not be released until it is approved by the Board of Trustees’ Compensation Committee.

“Coach Swinney has demonstrated that he is a very capable coach who is committed to competing athletically at the highest levels while maintaining equally high standards for academic performance and personal development of student-athletes,” said Clemson President James Barker.

Swinney was in his sixth season at Clemson as wide receivers coach, his second as assistant head coach when he was named the interim head coach on October 13.

Swinney has had a lot to do with the success of Clemson’s passing game over the last six years. He has coached a first-team or second-team All-ACC receiver each of the last five years and has had a player lead the ACC in receptions or reception yards three times. Clemson leads the ACC in passing yardage and completion percentage this year. Earlier this year Aaron Kelly became the ACC’s all-time leader in receptions.

Swinney has also had a strong impact on Clemson’s recruiting success in recent years. In February of 2006 he was listed as the fifth best recruiter in the nation by Rivals.com. He has been named one of the top 25 recruiters in the nation by that media outlet four times. He has signed 38 student-athletes in his five recruiting seasons and was a major reason Clemson’s 2008 class was ranked second nationally by ESPN.com when he signed 11 student-athletes.

During his time as a coach and player at Alabama, Swinney was a part of six teams with at least 10 wins, five top 10 finishes, one national championship (1992), three SEC titles and five SEC Western Division titles. He coached the number-two receiver in Alabama history in Freddie Milons and the number-one receiver in Clemson history in current Tiger Aaron Kelly.

Swinney is a native of Alabama who played on the Crimson Tide’s National Championship team of 1992. He is a 1993 Alabama graduate who earned his degree in commerce and business administration. He was named to the Academic All-SEC team during his career with the Crimson Tide.

Swinney and his wife Kathleen have three sons, Will, Drew and Clay.